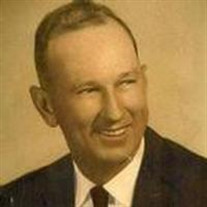 Pat Thompson Martin, age 88, retired trucking contractor, was born June 20, 1916, in Sebastian County, Arkansas. He departed this life on September 1, 2004, in Tecumseh, Oklahoma. Pat was preceded in death by his parents, John Battle Martin and Katie Ora Wilcox Martin. Pat married Opal Estelle "Jackie" Chambers on October 31, 1939, in Shawnee, Oklahoma. Jackie preceded Pat in death on January 25, 1969. To this union was born Gary Lynn Martin of Wellston, Ok, William Kent Martin of Indianola, OK, and Deborah Pat Martin Burch of Longview, Texas. Pat is survived by five grandchildren; Brenda Renee Martin Surowicz, of Norman, OK, Angelia Rae Martin, of Noble, OK, Chad Lynn, Martin, of Edmond, OK, Patrick Todd Martin, of Norman, Ok, and Darcy Leigh Burch of Longview, Texas. Pat is also survived by three great grandchildren, Tyler Elizabeth Surowicz, of Norman,OK, Elizabeth Tate Martin, of Edmond, Ok, John Fulton Martin of Edmond, OK. Pat worked at many different positions in the oilfield. He rose to the position of Superintendent of Drilling Operations for Warren Bradshaw Drilling Company. Pat left the drilling operations and formed his own trucking company and spent many years as owner-operator to the Turner Brothers Trucking Company. Based on his profession of faith, Pat was baptized on January 26, 1969, by his son William. He reaffirmed his faith during his stay in the Norman Regional Hospital two weeks ago. Pat did not attend church. He had nothing against churches and respected those who did attend regularly, but he seemed to view churches like he viewed storm shelters. He wasn?t against them and didn?t look down on those who used them, he just didn?t like to go to them. The family recognizes that Pat missed many blessings by not attending church and wished he had attended. Our family realizes that we missed many blessings by dad not being the religious leader of the family. But we also believe that his hope was in God?s grace and after all, that?s all any of us have. Some of us love doing "Churchy" things, but only God?s grace can save. Dad?s hope was exactly the same as ours. Some scriptures that mean a lot to the family: Eph 2:8 For it is by grace you have been saved, through faith?and this not from yourselves, it is the gift of God?(NIV) 2 Tim 1:8 So do not be ashamed to testify about out Lord, or ashamed of me his prisoner. But join with me in suffering for the gospel, by the power of God, (NIV) 9 who has saved us and called us to a holy life?not because of anything we have done but because of his own purpose and grace. This grace was given us in Christ Jesus before the beginning of time, (NIV) James 5:15 And the prayer offered in faith will make the sick person well; the Lord will rise him up. If he has sinned, he will be forgiven. (NIV) Services for Pat will be Friday, September 3, 2004 at 3:00 at Green Hill Cemetery, Lindsay, Oklahoma. Funeral arrangements are under the direction of B. G. Boydston Funeral Home in Lindsay, Oklahoma. Condolences to the Martin family may be sent online at www.boydstonfuneralhome.com.

The family of Pat Thompson Martin created this Life Tributes page to make it easy to share your memories.