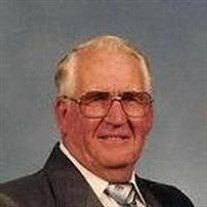 Omer Neal "Red " Davis of Lindsay passed away on March 7, 2004. He was born on December 24, 1932 to Willie and Minnie Davis at Panola County, Texas. After serving in the Air Force he went to work at Otis Engineering in 1956 in Carrollton, Texas and worked there until moving to Lindsay in 1974 to open Davis Machine Shop. Red married Lillie Mae Clingman on December 26, 1958 and had three children, Lea Ann, Roger and Cheryl. Red was a member of the County Line Baptist Church in Panola County, Texas and a long time member of the Masonic Lodge, India Temple Shrine and the Scottish Rite. Neal is survived by his wife, Lillie of the home, his daughters, Lea Ann and her husband John Springman, Cheryl and her husband Wayne Doyal, daughter in law, Cheri Davis, four grandchildren, Joanie Springman, Jamie and Jessica Doyal, Russell Davis and his mother-in-law, Leora Clingman all of Lindsay. Red is also survived by one sister, Jo Ann Garrett of Longview, Texas and many nieces and nephews all of whom were very special to him. Neal is preceded in death by his precious son Roger and five brothers, Albert, Darrell, Adren, Milford, Rudolph, and two sisters, Sue Jones and Ouida Britton. Red was a successful business man, but above all he was proudest of his family, especially his grandkids. Services will be held Wednesday, March 10, 2004 at 2 P.M. in the First Christian Church in Lindsay, Oklahoma, with Pastor Will Bently officiating. Interment will be held at Green Hill Cemetery in Lindsay with a Masonic Graveside service. Pallbearers will be Clinton Taylor, Tyson Rogers, Clay Whitefield, Homer Rinehart, Perry Farley, and Fred Anderson. Honorary Pallbearers will be Short Landers, Tom Stinnett, Blackie Workman, Odell Herrin, and Lloyd Sanders. Funeral arrangements for Omer Neal "Red" Davis are under the direction of B. G. Boydston Funeral Home, 308 SW Third Street, Lindsay

Omer Neal "Red " Davis of Lindsay passed away on March 7, 2004. He was born on December 24, 1932 to Willie and Minnie Davis at Panola County, Texas. After serving in the Air Force he went to work at Otis Engineering in 1956 in Carrollton, Texas... View Obituary & Service Information

The family of Omer Neal Davis created this Life Tributes page to make it easy to share your memories.

Send flowers to the Davis family.