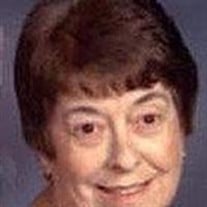 Nannie Jean Jordan Bell passed away April 11, 2004, in College Station, Texas. She was born September 23, 1926 in Lindsay, Oklahoma to Ben and Mae Jordan. Nannie and her husband Floyd lived in Tulsa, Oklahoma, Bountiful Utah and Sherman, Texas. Nannie and her husband retired from the trucking and service station business in 1990 and moved to Onalaska, Texas. She is preceded in death by her parents, Ben and Mae Jordan of Pauls Valley, Oklahoma. Nannie is survived by her husband of 55 years, Floyd E. Bell of Onalaska, Texas and her sister, Marie Edgmon of Tulsa, Oklahoma. She is also survived by her daughter and husband Jenna and Phil Player of Houston, Texas and son and daughter-in-law, Michael and Susan Bell of Dallas, Texas. She is also survived by one granddaughter, Jessica Player of Houston, Texas and one great-grandson, Daniel Brown, also of Houston. Survivors also include two nieces, Bennie Martin, and Pattie Jones and their families of Tulsa, Oklahoma. Graveside funeral Services will be Saturday, April 17, 2004 at 2:30, at Green Hill Cemetery, Lindsay, Oklahoma, with Rev. George Lupton offering words of comfort A memorial service will be held at the First Methodist Church of Onalaska, Texas on Monday, April 19, 2004, at 2:00 p.m. Memorials may be made to the American Diabetes Association.

The family of Nannie Jean Jordan Bell created this Life Tributes page to make it easy to share your memories.