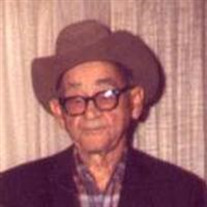 N. C. Cox, age 86, of Lindsay, OK, passed away on January 10, 2001 in the Golden Age Nursing Home in Guthrie, OK. He was born in Geronimo, OK on June 1, 1914 to Richard Caleb Cox and Allie Mae Cox. He moved to Lindsay around 1947 and owned an oilfield welding service. He was a member of the First Baptist Church in Lindsay. He enjoyed playing his harmonica and working on and driving his Model T. He also loved to garden and give away his cantaloupes and tomatoes. He is survived by his wife, Pearl L. Cox. They were married on Feb. 6, 1955 in Lindsay. He is also survived by sons, Richard F. Cox and wife, Jayme; Mark Cox and wife, Lori; and one daughter, Barbara Dickson and husband, Brent. He is also survived by seven grandchildren, Richard E. Cox, Ethan Cox, Gavin Cox, Catherine Cox, Hunter Cox, Blake Dickson and Brian Dickson. Three great grandchildren, Darin, Rachelle, and Chad. Funeral arrangements are with B. G. Boydston Funeral Home in Lindsay, OK. Services will be in the First Baptist Church in Lindsay on Sat., January 13, 2001 at 2:00 p.m. with Rev. Alvin McConnell, Jr. officiating. Burial will be in Green Hill Cemetery in Lindsay.

The family of N. C. Cox created this Life Tributes page to make it easy to share your memories.

Send flowers to the C. family.