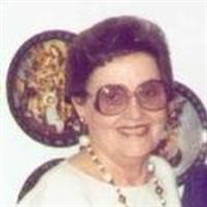 Morene Pickens died Sunday, April 22, 2001 in Heartland Plaza Assisted Living Center in Oklahoma City. Funeral services will be held at 10:30 a.m., Tuesday, April 24, 2001 in the B. G. Boydston Funeral Chapel in Lindsay, OK. Mrs. Pickens was born on July 24, 1918 in Wynnewood to Benjamin and Neley Belle Hobgood. She married Evert H. Pickens on May 19, 1933. They lived in the Liberty Hill Community near Lindsay and in 1948 moved to the Payne Community, returning to Lindsay in 1963. Morene was a homemaker and member of the First Baptist Church in Lindsay. She was preceded in death by her husband in 1994; her son, Albert M.(Buddy) Pickens in 1990; her twin sister, Lorene; sister Della; and three brothers. She is survived by her daughter, Joy Morgan and husband Howard of Oklahoma City; son, Howard Delane Pickens and wife Sally of Norman; daughter-in-law, Jean Pickens of Wylie, TX; and four grandchildren, Kent Morgan, Greg Pickens, Jeff Pickens and Elizabeth Pickens; four sisters, Willa Mae Agnes, Jeri Calame and Brunetta Farley of Oklahoma City; Pauline Broaddrick of Davis, OK; Mittie Karas of Los Angeles, CA; and one brother, Bill Hobgood of Portland, Oregon; and many nieces and nephews. Memorial contributions may be made to Hospice of Oklahoma County. Arrangements are with B.G.Boydston Funeral Home in Lindsay, OK.

The family of Morene Pickens created this Life Tributes page to make it easy to share your memories.

Send flowers to the Pickens family.