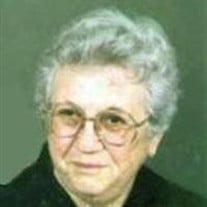 Mary Sunshine Malone, age 87, of Lindsay, Oklahoma passed away on January 9, 2002 in Grace Living Center in Lindsay. She was born in Seminole, OK on August 12, 1914 to Thomas Gaines Lemmings and Ezra V. Wilson Lemmings.enjoyed her church activities. She also enjoyed quilting and Sunshine was a member of the Erin Springs Baptist Church. She crocheting as her hobbies. She is survived by her husband, Henry of the home. They were married on March 13, 1939 in Seminole, OK. She is also survived by one daughter, Patricia A. Kirkpatrick and husband William of Phoenix, AZ. And one sister, Velma McCants of Aurora, CO. Six gandchildren, Danny Kirkpatrick and wife, Betty; Angela Robinette and husband, Jim; Levitta Kirkpatrick; Deborah Celaya and husband, Danny; Randy Kirkpatrick and wife, Ruth; and Sharon Martin. There are eighteen great grandchildren and two great-great grandchildren. Funeral services will be on Sat., Jan. 12, 2002 at 10:00 a.m. in the Erin Springs Baptist Church with Rev. Troy Taylor conducting the service. She will be laid to rest in Little Cemetery at Seminole, OK at 2:00 p.m. Pallbearers will be Brownie Drennan, Jack Ince, Kevin Beam, Mickey Hines, Randal Dutton and Hubert Everett. Honorary pallbearers will be grandsons, Danny Kirkpatrick and Randy Kirkpatrick; nephews, Gerald Malone, Gary Malone, David Malone, and Johnny Malone, Jr. Funeral arrangements are with B. G. Boydston Funeral Home in Lindsay, OK. Memorials may be viewed online at www.boydstonfuneralhome.com.

The family of Mary Malone created this Life Tributes page to make it easy to share your memories.

Send flowers to the Malone family.