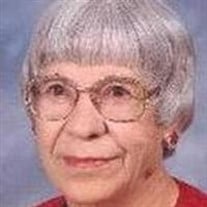 On March 10, 2003, just four days before her 92nd birthday, Marie LeBeau, affectionately known by many as Mama Re, passed away at Southwest Medical Center in Oklahoma City. She was born in Fox, Oklahoma, the first child of Elijah Buchannan Cross and Rosa Isabelle Fletcher Cross, on March 14, 1911. As a 20 year old bride, Marie married Rayford LeBeau on May 16, 1931. She taught at Fox for 16 years, Gatlin for 4 years, and Marlow or 11 years. Known as Aunt Re to her neices and nephews, she modified that name to Mama Re when she became a grandmother. It was by this name that people in Lindsay recognized the little lady who delivered loaves of homemade bread and faithfully visited the sick and elderly during the last 12 years she lived in this community. She moved to Lindsay from Marlow, where she and Rayford lived for 31 years. Until, just a few months ago, she was always ready and willing to drive friends to doctors appointments in Norman or Oklahoma City. She loved to travel and had seen much of the United States during her lifetime. Marie also loved to cook and entertain family and friends. She is a member of Calvary Baptist Church and Retired Teachers Association. Marie is survived by her children, Donna Moody of Lindsay, OK, Vance LeBeau and wife, Sue, of Paoli, OK, Nell Head and husband, Bill, of Oklahoma City, OK. Grandchildren Dennis Moody of Bixby, OK, Alan Moody of Norman, OK, Janis Davis of Lindsay, OK, Anita Charlson, of Norman, OK, Lara Fritz of Lindsay, OK, Kim Panter of Houston, TX, Curtis LeBeau of Mustang, OK; Jill LeBeau of Paoli, OK, Dean Head of Switzerland, Bean Head of Oklahoma City, OK, and Audra Beasley of Oklahoma City, OK. Fifteen great grandchildren. Marie is preceded in death by her husband, Rayford, both parents, and brother Herschel R. Cross. Services will be held on Wednesday, March 12, 2003 at 2:30 p.m. at the Calvary Baptist Church in Lindsay, OK, with Rev. Ron Blankenship and Dr. Bob Henson, officiating. Interment will be at Green Hill Cemetery in Lindsay, OK. Pallbearers will be Dennis Moody, Alan Moody, Curtis LeBeau, Dan Panter, Ted Davis and Eddie Charlson. Marie s passion was to meet the practical needs of others. She put her faith into practice by meeting those needs in whatever way God allowed. To honor her memory, a memorial may be made to the Oklahoma Baptist Homes for Children or the library fund or building fund of Calvary Baptist Church.

On March 10, 2003, just four days before her 92nd birthday, Marie LeBeau, affectionately known by many as Mama Re, passed away at Southwest Medical Center in Oklahoma City. She was born in Fox, Oklahoma, the first child of Elijah Buchannan Cross... View Obituary & Service Information

The family of Marie LeBeau created this Life Tributes page to make it easy to share your memories.

Send flowers to the LeBeau family.