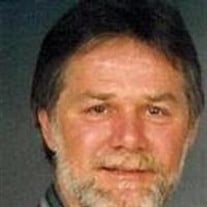 Marada Jack Palmer Jr.(Butch) passed away on February 25, 2004, at Mercy Hospital in Oklahoma City, Oklahoma. He was born on July 27, 1952 to Marada Jack Palmer, Sr. and Alice Maxine Weese Palmer,in Bakersfield, California. Butch completed his GED and attended some technical schools and was working and living in Ada, Oklahoma recently. Butch loved to spend time with his family and friends. He was there to help them out in time of need. Butch is survived by his son, Joseph Palmer, his daughter, Shawna Palmer, his father, Marada Jack Palmer, Sr., his three sisters, Doris June Baxter, Patricia Pauline, and Angela Renee Robinson. Butch is also survived by three brothers, Cecil Palmer, Danny Ray Palmer and Charles Palmer. Jack is preceded in death by one sister, Jackie Laverne, and one brother, James Edward Palmer. Grave Side services will be held on Friday, February 27, 2004 at 2:00 p.m. at the Erin Springs Cemetery, Erin Springs, Oklahoma. Funeral Arrangements for Marada Jack Palmer, Jr. are under the direction of B.G. Boydston Funeral Home, 308 SW Third Street, Lindsay, Oklahoma. Condolences may be sent to the family via our website at boydstonfuneralhome.com.

The family of Marada Jack Palmer Jr. created this Life Tributes page to make it easy to share your memories.

Send flowers to the Palmer family.