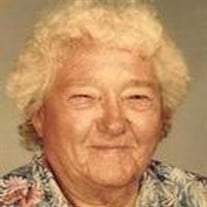 Lola Frachiseur Martin passed away on September 21, 2004, at the age of 93 after a lengthy illness. Lola was born Lola Sarah Frachiseur on July 26, 1911 to Luch and Leona (Overturf) Frachiseur at Mena, Arkansas. Lola married James Woods Martin on February 19, 1930 in Purcell, Oklahoma. She and Woods lived in the Foster, Oklahoma area since 1937 and raised six children. Lola was baptized and joined a Baptist Church when she was 16 years old. She enjoyed being a homemaker, taking care of her family, quilting, gardening and sewing. Lola is preceded in death by her parents, Leona and Luch Frachiseur and her husband, James Woods Martin. Woods passed away January 5, 1991. She is also preceded in death by three sisters, Alice Cheatwood, Nellie Harper, and Zellar Harper; as well as one brother, Wesley Payne Frachiseur. She is survived by six children and their spouses; Mildred and Moody Williams, of Lindsay, Oklahoma; Margie Webb of Lone Grove, Oklahoma; J.R. and Clara Martin of Foster, Oklahoma; D.L. and Gail Martin of Foster, Oklahoma; Linnie and Cecil Covel of Lindsay, Oklahoma, and Jeff and Karen Martin, of Foster, Oklahoma. Lola also leaves behind three sisters, Dixie Lyons, of Madera, California, Oza Shelton of Ojai, California, and Pebble Farrow, of Norman, Oklahoma. Lola was blessed and loved by thirteen grandchildren; twenty-three great-grandchildren; six great-great grandchildren; and a host of step-grandchildren, nieces and nephews. She will be missed by all. Services for Lola will be held at the B.G. Boydston Funeral Home Chapel in Lindsay, Oklahoma on September 24, 2004; at 4:00 p.m. Interment will be at the Green Hill Cemetery, Lindsay, Oklahoma.

The family of Lola Sarah Martin created this Life Tributes page to make it easy to share your memories.