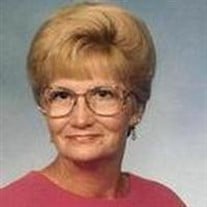 Lola Gail Jones passed away on March 28, 2004, at her home in Lindsay, Oklahoma. Lola was born on December 6, 1944 to Robert L. Hassler and Nettie Smith Hassler, in Bradley, Oklahoma. Lola married Kenneth L. Jones on December 29, 1972, in Chickasha, Oklahoma. Lola and Kenneth had two children, Bethenia D. Bancroft of Lindsay, Oklahoma and Kenneth M. Jones who is currently in the United States Air Force, stationed in South Korea. Lola is a 1963 Lindsay graduate and has lived in the Lindsay area for more than 30 years. Lola found that she loved working with plants and shrubs, and flowers and later Lola went back to school and completed two years at Wayne Vo. Tech studying Horticulture. She was the Greenhouse manager for Marcum Nurseries at Goldsby until her illness forced her to stop working. Lola was a member of the Banner Baptist Church and was baptized in June of 1961, she was also a member of the Horticulture Society. She is survived by her husband, Kenneth Jones, her daughter, Bethenia Bancroft and her son, Kenneth M. Jones. Lola is also survived by one sister, Phillis Hobbs, and four brothers, Melvin Hassler, Donnie Hassler, Kurt Hassler, and Keith Hassler, all of Lindsay, Oklahoma. Lola also leaves behind two grandchildren, B?Elanna Diane Bancroft and Cordell Isaiah Bancroft. Lola is preceded in death by father, Robert L. Hassler. Services for Lola will be held at the Banner Baptist Church on Wednesday, March 31, 2004, at 2:30 p.m., with Rev. Mike Roberts officiating. Interment will be at the Bradley Cemetery, Bradley, Oklahoma. Funeral services are under the direction of B. G. Boydston Funeral Home in Lindsay, Oklahoma.

The family of Lola Gail Jones created this Life Tributes page to make it easy to share your memories.

Send flowers to the Jones family.