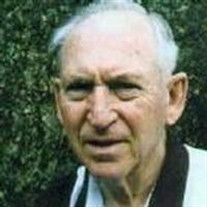 Leonard Bryant, age 75, of Lindsay, OK, passed away on October 5, 2001 in Purcell, OK. He was born on August 20, 1926 in Roff, OK to Charles Leonard Bryant and Tressie Davidson Bryant. Mr. Bryant married Marilyn Holt on July 9, 1950 in Antlers, Oklahoma. They have lived in Lindsay since 1957. He was a member of the Church of Christ in Lindsay. He was owner of the Western Auto Store in Lindsay from 1957-1985. He served on the Lindsay Municipal Hospital Board and was a member of the Kiwanis Club. He enjoyed playing golf. Survivors include his wife Marilyn Holt Bryant, of the home. Three sons and one daughter, Gary A. Bryant of Oklahoma City; Linda Bryant Wiles and husband Tom of Buckeye, AZ; David L. Bryant and wife Janet of Tulsa; and Bryan A. Bryant of Dallas, TX. Grandchildren are Melissa Wiles Johansen and husband, Andy; John Wiles, April Wiles, Whitney Bryant, Alex Bryant and Grant Bryant. He is also survived by one sister, Sharlene Holton of Valdosta, GA; and one brother, Bob Bryant of Duncan, OK. He is preceded in death by both parents. Funeral arrangements are with B. G. Boydston Funeral Home. Services are on Monday, October 8, 2001 at 10:00 a.m. in the Church of Christ in Lindsay. Rev. Tom Wiles and J. D. Bryant will conduct the service. Burial will be at 3:00 p.m. on Monday in the Oddfellows Cemetery in Antlers, OK. Pallbearers will be John Wiles, Andy Johansen, Alex Bryant, Bill Gibson, Tom Inman, and Lynn Watkins. Honorary pallbearers will be Grant Bryant and the Elders and Deacons of the Church of Christ. Memorials or donations may be made to the National Parkinsons Association or Charity of choice.

The family of Leonard Bryant created this Life Tributes page to make it easy to share your memories.

Leonard Bryant, age 75, of Lindsay, OK, passed away on October...

Send flowers to the Bryant family.