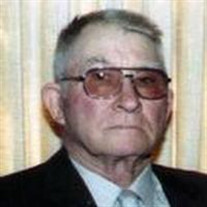 Lawrence B. Branch, age 91 years, 7 months, 4 days, of Lindsay, OK, passed away on April 6, 2001 in the Grace Care Center in Lindsay, OK. Services will be held in the Freewill Baptist Church in Lindsay on Monday, April 9, 2001 at 2:00 p.m. with Rev. John Griffith and Rev. Joe Conn officiating. Lawrence was born on September 2, 1909 in Deckherd, Tennessee to Charles T. and Matilda Stephens Branch. He moved with his family to Oklahoma and settled in the Dare Community, north of Lindsay. Lawrence was the second of five children, one brother and four sisters. He and his family farmed in the Dare Community for several years. Lawrence was married to Crystal Kendrick and from this union a daughter, Mona Branch Thomas was born. He returned to his family in Tennessee where he met and married Emma Maud Nunley on March 11, 1935. From this union three daughters were born. Lawrence and Maud returned to Oklahoma again to farm in the Dare Community. Later moving to Lindsay in 1947 and continued to farm until his retirement, then moving into town to reside at 512 SE Second Street. He was a member of the Freewill Baptist Church at 502 S. Main in Lindsay where he served as a Sunday School Teacher and Deacon of the church for fifty-plus years. He was in ill health for the last few years and in February was moved from the home into Grace Care Center for his short stay. He was preceded in death by both parents, one brother, John Branch of California; and one sister, Clara Dixon of Ennis, Texas. He is survived by his wife, Maud of the home. Four daughters, Mona Thomas and husband Ralph of Lindsay; Melba Cowin and husband, Don of Norman; Barbara Tobey and husband, Dean of Tuttle; and Debbie Hooper of Yukon, OK. Ten grandchildren, Sue Thomas Smith, Houston, TX; Mike Thomas, Lindsay; Mike Cowin, Norman, OK; Richard Cowin, Arlington, TX; Greg Cowin, Turnbull, Conn.; Rick Tobey, Tuttle, OK; Dennis Tobey, Clarksville, AR; Lisa Turley, Oklahoma City; Lori Hooper, Oklahoma City and Christopher Hooper, Oklahoma City. Great grandchildren, Sheridan and Jeffrey Smith; Valerie and Matthew Thomas; Ashley, Tasha, Steven and Angela Cowin; Aaron and Eric Tobey; Michael and Justin Tobey; and Amanda, Tyler and Shane Turpin. and four great-great grandchildren. He is also survived by two sisters, Verna Hall of Dibble, OK; and Lucille Jordan of Grace Care Center.Many nieces and nephews and other relatives and many friends. Burial will be in Green Hill Cemetery in Lindsay under the direction of B. G. Boydston Funeral Home. Casket Bearers will be Karol Finley, Mike Thomas, Richard Cowin, Mike Cowin, Wiley Jordan and Gary Jordan. Honorary pallbearers are Merle Schwartz, Kenneth Williams, Cecil Jones, Earl Wilson, Short Landers, Fred Mills, George Burns, Houston Standridge, and Harry Moore, Jr.

The family of Lawrence B. Branch created this Life Tributes page to make it easy to share your memories.