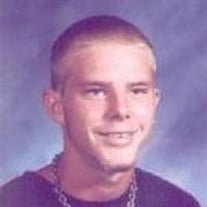 Kyle Christopher Towler, age 18, of Noble, OK, died on October 29, 2000 at University Hospital in Oklahoma City, OK as a result of an automobile accident on Hwy 76 South of Lindsay. Kyle is a former resident of Lindsay, OK and attended Lindsay... View Obituary & Service Information

The family of Kyle Christopher Towler created this Life Tributes page to make it easy to share your memories.

Send flowers to the Towler family.