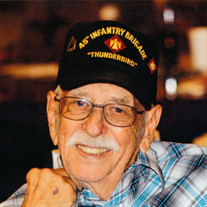 Kermit Olen “K.O.” Selzer passed away on Friday, October 29, 2021, in Norman, Oklahoma, at the age of 92. He was born on June 6, 1929, at the old home place in Bradley, Oklahoma, to Edward Carl Jr. and Emma Rose (Nesbit) Selzer. Kermit was of Catholic Faith. He graduated from Bradley High School in 1947. He married Trula Fay Burrous on October 6, 1949, in Lawton, Oklahoma, after high school he went to Cameron University and then transferred to Oklahoma State University (OSU) in Stillwater where he graduated with a Bachelor’s Degree to become a Vo-Ag teacher. He made his passion of farming and FFA a career. He retired in 1985 after teaching for 30 years. He loved welding and teaching his grandson Brandon many welding skills and spending many summers at the lake with his granddaughter Brittany were some of his favorite memories. Kermit loved to travel. He and Trula went South to Texas for the winter for thirty-four years. They considered themselves Winter Texans. After Trula’s passing, Kermit continued to travel and go dancing. He remarried in 2018 to Linda Philemore. They traveled to Branson, Missouri, a few trips to South Texas, and went to several dances together. Kermit loved listening and dancing to Country/Western swing music. Kermit is survived by his wife, Linda Selzer, his daughter, Theresa Hooper and husband Bill, his grandson, Brandon Hooper and granddaughter Brittany Hooper. And other grandchildren, Mary, Missy, Mica, Martha, and Molly. He will be missed beyond measure by his wife, daughter, grandchildren, as well as all the family and friends who loved him. Kermit is preceded in death by his late wife Trula Faye Selzer, his son, Mike Selzer, his parents Edward Carl Jr. and Emma Rose Selzer, half siblings, Jim, Orin, Louise, Vera, and George, and a very special aunt Frankie Bell Anthony. A funeral service to honor the life of KO is set to begin at 11:00 A.M. on Wednesday, November 3, 2021, at the Wilbourn Family Funeral Home Chapel in Lindsay, Oklahoma. He will be laid to his final rest in Bradley, Oklahoma following the service. Services are under the direction of Scott and Angel Wilbourn of Wilbourn Family Funeral Home in Lindsay, Oklahoma. Condolences may be made to the family online at www.wilbournfamilyfuneralhome.com.

The family of Kermit Olen Selzer created this Life Tributes page to make it easy to share your memories.

Send flowers to the Selzer family.