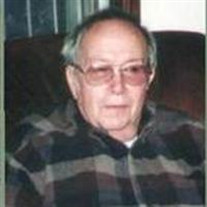 Kenneth Ray Hale, age 68, of Lindsay, OK passed away on Sept. 9, 2001 at his home in Lindsay, after a short, courageous battle with cancer. He was born in Seminole, OK on Oct. 2, 1932 to John V. Hale and Bertha Maples Hale. He moved to Lindsay in Jan. 1972 and worked for Henderson TV in the Service Dept. In 1975 he begin working for Bolay Communications. And in 1976 he started his own business as Electronics and Mobile Communcations Specialist in Sales and Service and owned and operated Lindsay Two-Way Consolidated, Inc. He was also a partner in TriCom Tower Leasing. Kenneth was a member of the United Methodist Church. He enjoyed country music, playing his guitar, gardening and his family and three grandchildren. He is survived by his wife, Nina Merten Hale, of the home. They were married in Huntsville, AR in 1952. Two daughters, Rebecca Hale of Bolingbrook, Illinois; and Brenda Postlethwaite and husband, Mike of Lindsay. Two sons, Ronne Hale, Addison, TX; and Jeffery Hale and wife, Holly of Choctaw, OK. Grandchildren are Keelia Postlethwaite, Kalli Postlethwaite, of Lindsay; and Zachary Hale of Choctaw, OK. He is also survived by two brothers, Preston Hale and wife, Mary of Bakersfield, CA; Johnny Leon Hale, Lindsay; and sister, Loretta Cooke and husband, David, St. Jo, Texas. Also, one sister-in-law, Vernie Hale. He is preceded in death by both parents and one sister, Clarice West Roe; and one brother, Willie V. Hale. Funeral arrangements are with B. G. Boydston Funeral Home in Lindsay. Services will be held in the United Methodist Church in Lindsay with Rev. George Lupton officiating. The service will be on Wed., Sept. 12, 2001 at 2:30 p.m. Burial will be in Green Hill Cemetery in Lindsay. Pallbearers will be Doug Pratt, Jimmy Henderson, Dwight "Skip" Jones, Charlie Trammell, Gary Wofford, Sherwood Eastman, John Heflin and Bob Bartley. Honorary pallbearers are Gene Townsend, Wayne Ireland, Bob Sies, Tom Stinnet and Ray Phillips.

Kenneth Ray Hale, age 68, of Lindsay, OK passed away on Sept. 9, 2001 at his home in Lindsay, after a short, courageous battle with cancer. He was born in Seminole, OK on Oct. 2, 1932 to John V. Hale and Bertha Maples Hale. He moved to Lindsay... View Obituary & Service Information

The family of Kenneth Ray Hale created this Life Tributes page to make it easy to share your memories.

Send flowers to the Hale family.