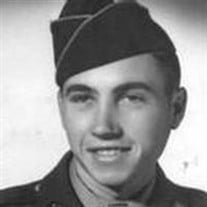 John C. Blankenship was born July 9, 1924 to William Luther and Regina De Graffenreid Blankenship on the family farm east of Forestburg, Montague County, Texas. He passed from this life on February 10, 2001 at his home in Lindsay, OK at the age of 76 years and 7 months. He served his country in the United States Army during World War II. He was First Scout in the 96th Infantry Division serving in the South Pacific. He received many medals; among them being the Purple Heart for wounds he received on Okinawa. After being discharged from the service, he received his high school diploma from Forestburg High School. John married Nelda Ann Shults on March 15, 1952 in the First Baptist Church at Rosston, Cooke County, Texas. They moved to Lindsay, Oklahoma in August of 1953. John was employed in the oil industry as Yard Manager for Chris-Welltech Well Servicing for over 30 years. He retired in 1986 due to his health. He was a long-time member of Calvary Baptist Church in Lindsay, the American Legion, Veterans of Foreign Wars and a lifetime member of the D.A.V. His hobbies were gardening and working in the yard; but his most precious pastimes were activities with his family, especially his Grandchildren. They were precious to him and he was Grandad to them. John is survived by his wife, Nelda, of the home in Lindsay; one daughter, Denise Nifong and her husband, Dan, of Harrah, OK; three sons, Craig Blankenship and his wife, Tammy, of Oklahoma City, Russ Blankenship and his wife, Lexa, of California, Rick Blankenship and his wife, Judy, of Singapore. Four grandsons; Curt Blankenship and his wife, Andrea, Clint Blankenship, Kyle Blankenship, and Garrett C. Blankenship. Two granddaughters; Nicole Nifong and Paige Nifong; and one great grandson, John Blankenship IV. One sister, Laura Nell Rose and her husband, John, of Del City. Brother-in-law Bill Shults and his wife, Ginny, of Denton, Texas; sister-in-law Melba Iund and her husband, Koen, of El Paso, Texas, and a host of nieces, nephews and friends. He was preceded in death by both parents, three brothers; Luther, A. C., and Calvin Blankenship; two sister, Regina Scott and Alta Hukill; father-in-law and mother-in-law, Dee and Louise Shults; one grandson, John Knapp. He was a loving husband, father, grandfather, brother and son-in-law. John was a hard worker and took pride in his work. He was a little man with a big heart. Services will be Tuesday, February 13, 2001 at 2:00 p.m. in Calvary Baptist Church in Lindsay with Rev. Bill Baxter and Rev. Ron Blankenship officiating. Pallbearers are sons, Craig Balnkenship and Rick Blankenship; grandchildren, Curt Blankenship, Clint Blankenship, Kyle Blankenship, Garrett C. Blankenship, Nicole Nifong and Paige Nifong. Honorary pallbearers are Men?s Sunday School Class at Calvary and all of those that knew and loved him. Arrangements are with B. G. Boydston Funeral Home with military honors by Lindsay American Legion Post #23. He will be laid to rest in Green Hill Cemetery, Lindsay, Oklahoma. Memorials may be made to the charity of your choice.

John C. Blankenship was born July 9, 1924 to William Luther and Regina De Graffenreid Blankenship on the family farm east of Forestburg, Montague County, Texas. He passed from this life on February 10, 2001 at his home in Lindsay, OK at the... View Obituary & Service Information

The family of John C. Blankenship created this Life Tributes page to make it easy to share your memories.

Send flowers to the Blankenship family.