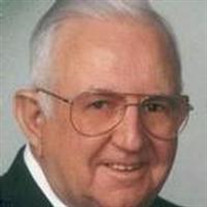 Jewell K. Griffith of Lindsay, age 93, died at home June 23, 2003. He was born April 1, 1910, in Apache, Oklahoma, to George Clarence Griffith and Pearl Shade Griffith. He graduated from Apache High School and attended Oklahoma A & M, Stillwater, Oklahoma, for 3 years. He worked for 13 years at the Anderson-Pritchard Oil Refinery in Cyril, Oklahoma. He entered the banking industry in 1946 through his wife Jane Dilling Griffith whose family was affiliated with the First National Bank in Fletcher since the early 1900 s and purchased it in 1922. From 1946 to 1951 he worked as an assistant cashier at the Bank and served on its Board of Directors. In 1951, he moved to Moore, Oklahoma, to be the Executive Vice-President of the First National Bank. In 1957, he became the Vice-President of the American Exchange Bank in Lindsay. In 1972, he purchased the American Exchange Bank and became President , C. E. O. and Chairman of the Board until 2000. In addition, he served as President of the First National Bank of Fletcher, Oklahoma, until 2000 . He was a member of the United Methodist Church, Lindsay Rotary Club, Lindsay Golf Association, Masonic Lodge at Cyril and Moore, and Oklahoma Bankers Association. Jewell was preceded in death by his father, mother and two sisters. He is survived by his wife, Jane Dilling Griffith, of the home, one son Barre K. Griffith and wife Sharon of Lindsay, Oklahoma, one daughter Ann Griffith Thomas and husband Terry of Lindsay; five grandchildren, Kimberly Thomas Tigert and husband Todd, Jared Griffith Thomas, Matthew Christopher Griffith, Paula Brandon Barron and husband, Brock, and Kristen Loreen Brandon and 3 great-grandchildren, Jeffrey Brooks Tigert, Hayden Emily Barron and Elliot Alexandra Barron. Jewell loved playing golf, baseball, music and following O. U. athletics. Services will be held Thursday, June 26, 2003, at 10:00 a.m. at the United Methodist Church of Lindsay and interment at Green Hill Cemetery of Lindsay. Memorial gifts may be made to the Oklahoma Medical Research Foundation, to the United Methodist Church of Lindsay, Oklahoma, or to the Lindsay Youth Council for the Griffith Sports Complex. The land for the Sports Complex was donated by Mr. Griffith in 1994. Arrangments are with B. G. Boydston Funeral Home. Memorials may be viewed online at www.boydstonfuneralhome.com

The family of Jewell K. Griffith created this Life Tributes page to make it easy to share your memories.

Send flowers to the Griffith family.