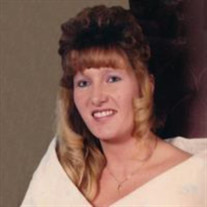 Janice Laverne (Watson) Silva entered this world on February 8, 1963. She was born to O.J. Haskell Watson and Nadine Laverne (Stovall) Watson. She passed from this life on February 9, 2021, at the age of 58. Janice married the love of her life, Farren Silva. Together they had five children, Rachel, Desiree, Destiny, Angela, and Farren. Janice spent most of her life in the Shawnee and Oklahoma City areas. In recent years, she attended services at the Salvation Army Church. Janice enjoyed listening to Christian music and taking naps. She always had to have her sweet tea and boiled eggs. She loved to write letters and poems for her children. Her greatest joy was spending time and playing with her beloved grandchildren, Heaven and Justus. Janice is survived by her father, O.J. Watson of Oklahoma City; daughter Rachel King of Oklahoma City; daughter Desiree Christensen and husband Allen of Shawnee; daughter Destiny Watson of Shawnee; daughter Angela Watson of Oklahoma City; son Farren Watson of Oklahoma City; the father of her children Farren Silva of Oklahoma City; sister Donna Barnfield of Joplin, MO; brother Joey Williams of Joplin, MO; brother Haskell Watson and wife Belcy of Oklahoma City; brother David Watson and wife Pepolina of Shawnee; sister Deanna Gaglierdi of Tecumseh; sister Tina Watson of Silva, MO; brother Louis Barton of Silva, MO; granddaughter Heaven Watson; grandson Justus Watson; and numerous nieces, nephews, and friends. Janice is preceded in death by her mother, Nadine Watson, and her brother, Hershell Watson. A service to honor the life of Janice is set to begin at 2:00 P.M. on Saturday, February 13, 2021, at the Wilbourn Family Funeral Home Chapel in Lindsay, Oklahoma. Services are under the direction of Scott and Angel Wilbourn of Wilbourn Family Funeral Home in Lindsay, Oklahoma. Condolences may be made to the family online at www.boydstonfuneralhome.com

Janice Laverne (Watson) Silva entered this world on February 8, 1963. She was born to O.J. Haskell Watson and Nadine Laverne (Stovall) Watson. She passed from this life on February 9, 2021, at the age of 58. Janice married the love of her... View Obituary & Service Information

The family of Janice Laverne Silva created this Life Tributes page to make it easy to share your memories.

Send flowers to the Silva family.