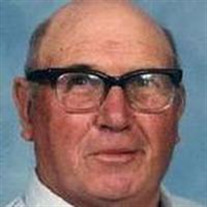 James Luther "Junior" Webb, Jr., age 79, life long resident of the Bryant - Payne Community in McClain County passed away Thursday, May 29, 2003 at the Pauls Valley General Hospital of extended illness. JL Webb, Jr. was born on October 13, 1923 in McClain County community of Bryant to James Luther and Pearl May Webb. Junior Webb was the youngest and last brother living of his two brothers and five sisters. He married Pauline (Cunningham) Webb from the Hughes community in Garvin County on December 21, 1950 in Lindsay, OK. She preceded him in death on April 28, 1999 and one son-in-law, John Johnson on March 6, 2000. JL and Pauline Webb were married 48 years. Together they raised three children: Linda Faye (Webb) Johnson, Kay (Webb) Miller and James Ray Webb. He lived his entire life on his childhood home place farming and raising livestock. In his early years, he worked jobs in the oilfield industry, worked with his brother-in-law for the Firestone Tire & Rubber Company. Later he worked at the Farmers Co-op Cotton Gin in Wayne many years before retiring in 1995. He never met a stranger and always loved to chat, visit with friends and neighbors of the community. He is survived by Linda (Webb) Johnson, of Purcell, OK; Kay (Webb) Miller and husband Stanley, of Lindsay, OK; James Ray and Gigi Webb, of Maysville, OK currently residing in Udhailiyah, Saudi Arabia. He is also survived by five grandchildren: Lisa Coronada of Fresno, CA; Darrell Bennett of Purcell, OK; Brandon Miller of, Lindsay, OK; Josh Miller of, Lindsay, OK; and Laura Webb of Udhailiyah, Saudia Arabia. Two great grandchildren: Chris and Jeannie Bennett of Purcell, OK as well as two brother -in-laws and two sister-in-laws: Coleman Hedrick of Purcell, OK; Paul and Freda Cunningham, Faye Mullins all of Oklahoma City and numerous nieces and nephews. Services will be, Monday, June 2, 2003, at 2:00 p.m., at United Methodist Church, with Rev. George Lupton officiating. Interment will be held at Green Hill Cemetery in Lindsay. Memorial may be viewed online at www.boydstonfuneralhome.com. Arrangements are with B.G. Boydston Funeral Home in Lindsay. Public viewing will be at the funeral home Friday from 4 pm to 8 pm, Saturday from 8:30 am to noon and 1 pm to 6 pm, Sunday from 1 pm to 6 pm and Monday from 8:30 am to noon.

The family of James Luther Webb, Jr. created this Life Tributes page to make it easy to share your memories.

Send flowers to the Webb, family.