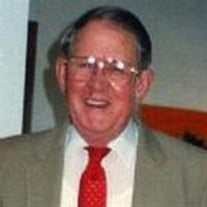 James Ralph Roop, age 89, of Lindsay, Oklahoma passed away on Wednesday, August 27, 2003, in Oklahoma City, Oklahoma. James was born on April 14, 1914, to James Leonard and Effie (Powers) Roop of Loving, Oklahoma. After graduating high school, James went on to Oklahoma A & M and got a masters degree in Business Administration. James was in the U.S. Marine Corp where he served in World War II. He married Imogene Cooper on December 22, 1945 in Poteau, Oklahoma. He married his second wife, Bernice Hood, on November 6, 1976 in Lindsay, Oklahoma. When he moved to Lindsay in 1957, he was the manager of the local lumber yard. James was involved in the Amercian Legion. He loved to do woodworking, playing dominoes, and volunteering for the senior citizens. James was a member of the First Baptist Church in Lindsay, Oklahoma. He is survived by his children, six sons: James R. Roop Jr. and wife, Janie of Oklahoma City, Oklahoma; Jerry Roop and wife, Nancy of Duncan, Oklahoma; Joe Roop and wife, Claire of Oklahoma City, Oklahoma; Jim Hood and wife, Ann of Nashville, Arkansas; Jack Hood and wife, Laura of Fort Smith, Arkansas; and Bob Hood and wife, Linda of Piedmont, Oklahoma, two daughters: Margie and husband, Gene Donoho of Guthrie, Oklahoma and Ann Shoemake of Lindsay, Oklahoma, one sister, Margaret Manning of Heavener, Oklahoma, 18 grandchildren, numerous great grandchildren, and great-great grandchildren. James is preceded in death by both of his parents, his first wife Imogene in 1975, his second wife Bernice ( Hood) Roop in 1998, one daughter, Pat Jordan in 1983, one great grandson, two brothers: Hoyt Roop and Cecil Roop, and one sister Louise Roop. Services will be held on Friday, August 29, 2003, at 1:30 p.m. at the First Baptist Church in Lindsay, with Rev. Gene Sanders officiating and Rev. Randy Allen assisting. Burial will be on Saturday, August 30, 2003 at 1:30 p.m. at Loving Cemetery in Loving, Oklahoma, with Rev. Wayne Fowler officiating. Honorary Casket Bearers will include the Adult One Men s Joshua Class. Condolences may be sent online at www.boydstonfuneralhome.com. Arrangements are with B.G. Boydston Funeral Home in Lindsay.

The family of James R. Roop created this Life Tributes page to make it easy to share your memories.

James Ralph Roop, age 89, of Lindsay, Oklahoma passed away on...

Send flowers to the Roop family.