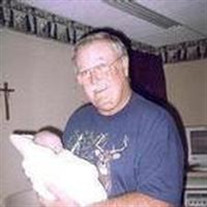 Jack Scyrkels went home to his Lord at the age of 66 on June 29, 2004, at his home in Lindsay, Oklahoma. Jack was born in Lindsay, Oklahoma March 15, 1938 to Archie Lee and Frances Louise Martin Scyrkels, and has been a Lindsay resident all of his life. Jack spent 15 years in the U. S. Army; part of his military time was during the Cuban Crisis. Jack then returned to Oklahoma and married Georgia Spurgin in Pauls Valley, Oklahoma on October 16, 1965. Jack was an ordained minister of the Gospel of Jesus Christ. He was a member of the Faith Pentecostal Church of God in Lindsay, Oklahoma. He served as City Councilman for 8 years and Mayor of Lindsay for 1988 & 1989. Jack was well known for "Jack?s Plumbing and Electric", since 1980. He enjoyed his work but loved to get away and go hunting, fishing, camping and boating. He enjoyed coaching peewee football and assisting coaching baseball. He also enjoyed spending time with his grandchildren and watching OU football and basketball Jack is preceded in death by his parents, his step-mother, Jewel Scyrkels, two brothers, Bob Scyrkels, Jerry Scyrkels, and one sister, Wanda Sparkman. He is survived by his loving wife Georgia, three sons, Martin Shawn and family, Stephen Scott and Chanda, and Brett Alan and Pamela Scyrkels, one brother, Bill W. Scyrkels and one sister, Sheri Louise Scyrkels Cudd. Jack also leaves behind his six grandchildren, Helena Gabrielle Scyrkels, Tristan Izec Miller, Sebastian Drake Chrismon, Megan Marie Scyrkels, Jacob Alan Scyrkels, and Chandler Simone Scyrkels. Jack will be missed by many friends, neighbors, and customers. Services for Jack will be Saturday, July 3, 2004 at 10:00 a.m. at the First Assembly of God in Lindsay, Oklahoma. Interment will be at the Green Hill Cemetery in Lindsay, Oklahoma. In honor of Sergeant First Class Jack Scyrkels? military service The American Legion, Ball Smith - Post 23 will conduct a 21 gun salute, taps, and present Mrs. Georgia Scyrkels with the U. S. Flag. Funeral arrangements are under the direction of B. G. Boydston Funeral Home in Lindsay, Oklahoma. Condolences may be sent to the family online www.boydstonfuneralhome.com.

Jack Scyrkels went home to his Lord at the age of 66 on June 29, 2004, at his home in Lindsay, Oklahoma. Jack was born in Lindsay, Oklahoma March 15, 1938 to Archie Lee and Frances Louise Martin Scyrkels, and has been a Lindsay resident all... View Obituary & Service Information

The family of Jack Scyrkels created this Life Tributes page to make it easy to share your memories.

Jack Scyrkels went home to his Lord at the age of 66 on June...

Send flowers to the Scyrkels family.