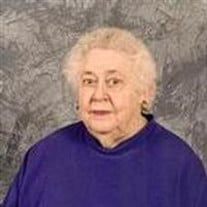 Irene Kanive Travis passed away August 24, 2004 in Norman, Oklahoma at the age of 83. She was born Irene Adell Hackney on April 1, 1921 in Johnson, McClain County, Oklahoma and was a lifetime resident of Lindsay, Oklahoma. Her parents were Barney... View Obituary & Service Information

The family of Irene Kanive Travis created this Life Tributes page to make it easy to share your memories.

Send flowers to the Travis family.