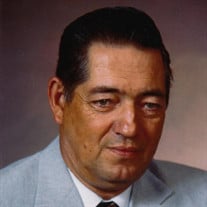 Hershel Lee Keck, Sr., was born in Powell, Oklahoma, on March 18, 1935, to Fred Warren Keck and Gracie Oral (Hargis) Keck. He passed from this life on October 3, 2021, in Purcell, Oklahoma, at the age of 86. Hershel has been a resident of Lindsay for over sixty years. He was a retired Lindsay police officer. Hershel also proudly served in the United States Army. Hershel married the love of his life, Geneva Deora (Hulsey) Keck, in Pauls Valley, Oklahoma, on September 18, 1961. They celebrated fifty-one years together before her passing in April of 2012. Hershel loved being in the outdoors. He enjoyed camping, fishing, and hunting. Hershel was a wonderful husband, father, and grandfather. He was a family man and cherished the times he got to spend with his wife, children, and grandchildren. Hershel is preceded in death by his parents, Fred and Gracie Keck, his wife, Geneva Keck, and a brother, Cecil Keck. Left to cherish Hershel’s memory are his children, Brenda Keck of Lindsay, Oklahoma, Becky (Keck) Lovelace of Lindsay, Oklahoma, and Herschel Lee Keck, Jr. and wife Connie Gayle of Lindsay, Oklahoma, his sister, Alene Hill of Idabel, Oklahoma, his grandchildren, Melissa Glenn, Michael Rowell, Ray Lee Richards, Julie Keck, Catherine Keck, Kimberly Coles, Amy Keck, and Philip Keck, and great grandchildren, Tenley Jarman and Annistyn Jarman, and a great granddaughter coming in January 2022. A funeral service to honor the life of Hershel is set to begin at 2:00 P.M. on October 7, 2021, at Erin Springs Baptist Church in Erin Springs, Oklahoma, with Pastor Clay Hicks officiating. He will be laid to rest at the Purdy Cemetery following the service. Services are under the direction of Scott and Angel Wilbourn of Wilbourn Family Funeral Home in Lindsay, Oklahoma. Condolences may be made to the family online at www.wilbournfamilyfuneralhome.com

Hershel Lee Keck, Sr., was born in Powell, Oklahoma, on March 18, 1935, to Fred Warren Keck and Gracie Oral (Hargis) Keck. He passed from this life on October 3, 2021, in Purcell, Oklahoma, at the age of 86. Hershel has been a resident of Lindsay... View Obituary & Service Information

The family of Hershel Lee Keck Jr. created this Life Tributes page to make it easy to share your memories.

Send flowers to the Keck family.