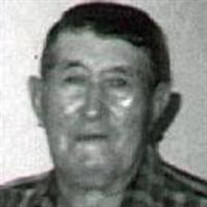 Henry Levi Malone, age 83, of Lindsay, OK passed away on May 31, 2002 in Lindsay, OK. Henry was born on January 4, 1919 in Durham, AR (Washington Co) to George Taylor Malone and Lilly Mae Frost Malone. He was married to Mary Sunshine Malone on March 13, 1941 in Wewoka, OK. Henrys family moved to Seminole, OK around 1921, then to Beggs, OK in 1935, then back to Seminole. He attended school at Twin Oak just north of Seminole, OK. Henry went to work in the oil fields working for Flint Rig Company in the early 1940s. Henry enjoyed working on his cars and other machinery, he loved to fish and hunt since he was a young boy. He was always busy doing something, checking on family and friends asking if there was anything I can do. When Henry retired he loved working in his garden and his fruit trees and was very good at it. He was a very patient, kind and caring man, he was quiet, did not talk much he would rather listen. Henry never spoke ill of anyone, he would just say I wonder why they have to be that way. Henry became a Christian at an early age. He believed in the Lord and lived a good clean Christian life, working for the Lord. He was loved by all and he will be missed, but we know where he will be, in the arms of Jesus. Henry is survived by his daughter, Patricia Kirkpatrick of Peoria, AZ; brother, Johnny Malone, Grandchildren, Danny Kirkpatrick, Angela Robinette, Levitta Kirkpatrick, Deborah Celaya, Randy Kirkpatrick and Sharon Martin all of Arizona. Nineeen great grandchildren, five great-great grandchildren, four neices and six nephews. Henry is preceded in death by his wife Sunshine who passed away on January 9, 2002. Services will be Monday, June 3, 2002, at 10:00 a.m. in the Erin Springs Baptist Church with Rev. Troy Taylor, Johnny Beckham and Chaplain Steve Mayhan officiating. Henry will be laid to rest at Little Cemetery, Seminole, OK. at 2:00 p.m. Memorials may be made to the Erin Springs Memorial Building Fund. Memorials may be viewed online at www.boydstonfuneralhome.com Arrangements are with B.G. Boydston Funeral Home in Lindsay, OK.

The family of Henry Malone created this Life Tributes page to make it easy to share your memories.

Send flowers to the Malone family.