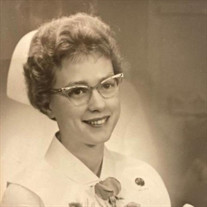 Harriet Frances Bruce Wilder Pool, 81, passed away in Edmond, Oklahoma, on Sunday, September 19, 2021. Harriet was born on June 22, 1940, to Reverend Francis and Ruth Bruce in Fairfax, Oklahoma. Harriet married Mike Wilder in December 1962 (deceased 1968) and married Bill Pool in June 1970. Harriet graduated in 1958 in Edmonton, Alberta, and completed her training as a Registered Nurse in 1961 at the University of Alberta. She moved to Enid, Oklahoma, to serve as school nurse at Phillips University while attending as a student. It was there she met and set her cap for Mike Wilder. She and Mike moved to Swink, Colorado, where they welcomed Laurie, Dawna, and Michelle to their family. Harriet worked as a nurse in La Junta before and after Mike’s passing. Harriet married Bill Pool in 1970, and moved to Lindsay, Oklahoma, where Heather completed their family. Bill and Harriet continued to enjoy being a part of Wilder family events and celebrations for many years. Harriet served the Lindsay community in many ways. She played piano and organ for various churches and events, chaperoned numerous school trips, served as church camp nurse, worked closely with the Lindsay Ministerial Alliance in support of the needs of the community, taught at the vo-tech school in Wayne training CNA and LPN students, and worked in hospice as both RN and administrator. After Bill retired from teaching in the Lindsay Public Schools, they moved to Grand Prairie, Texas, where Bill completed his doctorate degree in Chiropractic. While in Texas, Harriet supported Bill working as a full-time hospice nurse. Bill returned to Lindsay as Dr. Pool, DC, and returned to open their practice at Lindsay Chiropractic Clinic where Harriet served as the office nurse and manager until their retirement in 2013. In December 2019, they moved to The Willows in Pauls Valley. After Bill’s death in 2020, Harriet moved to Edmond, Oklahoma, to be closer to her daughter Dawna. Harriet endured pulmonary fibrosis along with other illnesses and challenges in her last years. Harriet is now free of these struggles, can hear and enjoy the most glorious music, and can take full and easy breaths in her heavenly home. Harriet was the queen of color and sparkles, decorated for each and every season, loved to entertain, was an avid game player, loved giving handmade gifts to all, threw tea parties for all ages, enjoyed travel - especially mountains, loved watching sports on TV and attending sporting events of her children and grandchildren, and prioritized being present at all minor and major life events of her family. Harriet rarely missed an opportunity to share her faith and the plan of salvation. Throughout her life, she mentored and supported many. Harriet is survived by four daughters: Laurie Crawford, Dawna Blue, Michelle Buchanan, and Heather Pool and spouse Lisa Clarke; sister Deahn and Ron Wilson, brother-in-love Mike Renken, brother-in-law Roger Huddleston, brother-in-law Mark and Pauline Wilder, sister-in-law Jenna Dee and Jobe Martin, brother-in-law Jake and Jane Pool; twelve grandchildren: Lauren, Kacee, Katie, Brandon, Jamil, Jadyn, Kristopher, Brent, Melanie, Elizabeth, David, Allyson; three great grandchildren: Olivia, Emma, and Ryan; and sixteen nieces and nephews. Harriet is preceded in death by husband Bill Pool, husband Mike Wilder, parents Francis and Ruth Bruce, mother-in-law Zella Pool, parents-in-law Lee Wilder and Virginia Wilder Barnes, sister Nada Renken, sister-in-law Cathie Huddleston, brother-in-law Dick Wilder and Martha Wilder Eberly. A memorial service for Dr. W.E. (Bill) and Harriet Pool will be held at 10am, Saturday, October 16, 2021, at the Lindsay United Methodist Church. Friends, patients, colleagues, and former students are invited to join the family to pay tribute to these two long-time residents of Lindsay. The family requests that attendees wear masks at the service. In lieu of flowers, donations can be made to World Vision to help children and their communities around the world to stand tall, free from poverty. https://mycause.worldvision.org/cam.../Harriet-Pool-Memorial Please visit Harriet Pool’s Facebook page for online memorial service options. Services are under the direction of Scott and Angel Wilbourn of Wilbourn Family Funeral Home in Lindsay, Oklahoma. Condolences may be made to the family online at www.wilbournfamilyfuneralhome.com

The family of Harriet Frances Pool created this Life Tributes page to make it easy to share your memories.

Send flowers to the Pool family.