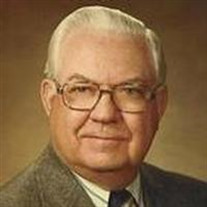 Guy Edward passed away at Grace Living Center-Norman on December 16, 2003. He was born February 27, 1917, twelve miles west of Gainesville, Texas, the eldest son of John Wesley and Florence Pearl Robberson. In 1919 Guy?s family moved to Covington, Oklahoma, where he attended school in Garber, Covington, and Sinclair until his family moved to Crescent. There he attended Banner Rural School in the 7th and 8th grade. He attended the first three years of high school at Earlsboro. His family then moved back to Crescent where he graduated from high school in 1934. Guy attended Central State University (now The University of Central Oklahoma) where he graduated in 1938 with a Bachelor of Science degree in education. In 1965 he was honored as a "Distinguished Former Student". Guy began his educational career at Bixby High School where he taught math and science for three years. On June 1, 1941, he married his college sweetheart, Zelda Mae Combs, at Trinity Baptist Church in Oklahoma City. Guy and Zelda moved to Keystone where he assumed a combination superintendent/teacher/coach position and Zelda taught elementary school and coached girls? basketball. They later returned to Bixby where Guy was high school principal and Zelda taught and coached for two years. Guy entered the United States Navy during the Second World War and was discharged in 1946. He and Zelda completed that year in Sayre as classroom teachers. In the summer of 1946 he completed his Masters Degree in Educational Administration from Oklahoma State University and accepted the position of Superintendent of Schools at Hydro. He served in Hydro for three years In 1949 Guy and Zelda moved to Lindsay where he became Superintendent of Schools. He served in that position for 32 years until his retirement in June of 1981. One of the things Guy was most proud of during his tenure was leading the district into Northcentral Accreditation. The high school was accepted in 1954 and the elementary in 1975. With the exception of an old gymnasium, the school facilities in 1981 were all built during Guy?s tenure. They called the school "The house that Guy built!" Guy served two terms on the Oklahoma Secondary Schools Activity Association Board from 1975 until his retirement in 1981. He also served as a board member for the State Northcentral Association. Upon his retirement he worked two years as a financial advisor for beginning school administrators, a position with the Oklahoma State Department of Education. Some of his highest honors were being voted Lindsay?s Most Useful Citizen in 1956, his recognition as a Distinguished Former Student of Central State University in 1965, and receiving Oklahoma Association of School Administrators Special Recognition for years of service as Oklahoma Superintendent of Schools. Guy was given the honorary title of Superintendent Emeritus upon his retirement. Guy served two terms as a Senator in the Oklahoma Silver Haired Legislature. Other honors include: The Lindsay School Sports Complex named as Guy Robberson Sports Complex; Special Commendation from the Lindsay Quarterback Club including lifetime membership; Honorary State Farmer degree at the 50th Annual convention; recognized for service to Lindsay 4-H Clubs. Guy held active membership in the National and Oklahoma Educational Association, Garvin County Retired Teacher Association, American Association of School Administrators, Lindsay Rotary Club (president 1957-58), Lindsay Elks Lodge, serving as chairman of the American Red Cross Bloodmobile Program, Lindsay Historical Society, Lindsay United Fund, serving for more than 20 years as secretary. Guy was one of a number of docents for the Lindsay-Murray Mansion. As an active member of the Lindsay United Methodist Church he has served as charge lay leader for many years as well as numerous other positions in the church including a member of the board for the local and district B

The family of Guy Edward Robberson created this Life Tributes page to make it easy to share your memories.

Guy Edward passed away at Grace Living Center-Norman on December...

Send flowers to the Robberson family.