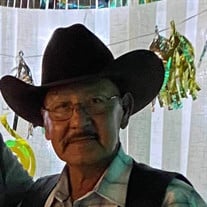 Gregorio Lara Medellin was born March 9, 1957, in Los Pilares, Villa De Zaragoza, San Luis Potosi, Mexico. He was the son of Maximino Medellin Rivera and Eusebia Lara Torres. He passed from this life on July 30, 2021, in Oklahoma City, Oklahoma, at the age of 64. He was a loving husband to Anita Leona Medellin and was an amazing father of six wonderful children; Greg, Rebecca, Marcus, Eric, Max, and Stephanie; all of Lindsay, Oklahoma. Gregorio “Gollo” was well known for his friendly smile and enjoyed meeting people and speaking to everyone. He enjoyed building toys out of wood for his grandchildren. He liked to garden, wasn’t afraid of doing his own home improvements, and loved taking care of his chicken, “Chicken Nugget.” But most of all, he loved spending time with his grandchildren, family, and friends. Gregorio met the love of his life, Anita, when he was 23 years old and they married a year later. They were married for forty-one years. He moved to Oklahoma from Mexico in 1978, at the age of 22. His first job was at a grain bin in Guthrie, Oklahoma. Gregorio worked numerous other jobs also, as a dairy farmer, in the oilfield, and returned after working at the car wash, due to health reasons. He was a hardworking and dependable man that was always willing to help anyone in need. He was thankful for his children’s and grandchildren’s achievements and blessed to have all his family still in the town of Lindsay. Gregorio was a blessing to all those who had the pleasure of knowing him. Gregorio is survived by his wife of forty-one years, Anita Medellin; his children: Greg Medellin and wife Monica, Rebecca Rivera and husband Agustin, Marcus Medellin, Eric Medellin and wife Amanda, Max Medellin and wife Kali, and Stephanie Medellin. He is also survived by his grandchildren: Shyan, Coda, Kenley, Gage, Paisley, Haylee, Aaron, Adrian, Erika, Ava, Benjamin, Kamryn, Knox, Kash, Avery, Olivia, and Camilla; and one great granddaughter, Amelia. Gregorio is preceded in death by his mother, Eusebia, his father, Maximino, his brothers, Benjamin Medellin Lara and Ignacio Medellin Lara, and his twin grandchildren, Raya and Max Medellin. Gregorio Lara Medellin’s family would like to thank everyone for the thoughts, prayers, and support that has been given to the family in this time of need. Please pray for Gregorio’s family, for comfort and support. Let’s celebrate Gregorio’s life and cherish the memories that we have of him. A funeral service to honor the life of Gregorio is set to begin at 10:00 A.M. on Thursday, August 5, 2021, at the Erin Springs Baptist Church in Erin Springs, Oklahoma. He will be laid to rest following the service at the Green Hill Cemetery in Lindsay, Oklahoma. Services are under the direction of Scott and Angel Wilbourn of Wilbourn Family Funeral Home in Lindsay, Oklahoma. Condolences may be made to the family online at www.wilbournfamilyfuneralhome.com

The family of Gregorio Lara Medellin created this Life Tributes page to make it easy to share your memories.

Send flowers to the Medellin family.