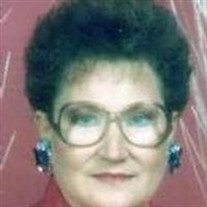 Glenna Rose Clagg, age 66, of Lindsay, Ok passed away Tuesday, July 9, 2002 at Deaconess Hospital in Oklahoma City. She was born July 31, 1935 in Purcell, Oklahoma to Glen D. Simpson and Goldie Marie Jacks Simpson. On October 23, 1954 in Payne, Oklahoma she married Don Clagg. Glenna was a member of the First Baptist Church and had lived in Lindsay for over 40 years. She was a wife and mother, and enjoyed metal detecting, sewing and reading. Glenna is survived by her husband, Don Clagg of the home. Children, Marlin Clagg and wife, Sonja of Chickasha, OK, Aaron Clagg of Sherman, Texas and Damon and wife, Janis Clagg of Oklahoma City. Brothers, Terry Simpson and wife, Cathy; Darrell Simpson and wife, Carolyn and Grant Simpson and wife, Glenda. Sister in law, Oteka Simpson. Grandchildren: Angela, Sharon, Randell, Stephanie, and Scotty. Four great-grandchildren. She was preceded in death by her parents Marie and Glenn Simpson and one brother, Donald Simpson. Arrangements are with the B. G. Boydston Funeral Home in Lindsay. Services will be held at 2:30 pm Thursday, July 11, 2002 at the B. G. Boydston Funeral Chapel with Rev. Jim Price officiating. She will be laid to rest at the Green Hill Cemetery in Lindsay. Pallbearers are Clarence Hudspeth, Lynn Watkins, Bill Cowen, Terry Yandell, Gene Sanders, and Aaron Lokey. Memorial may be viewed online at www.boydstonfuneralhome.com

The family of Glenna Rose Clagg created this Life Tributes page to make it easy to share your memories.

Send flowers to the Clagg family.