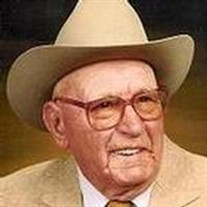 Fred Sanders passed away at the Lindsay Municipal Hospital on March 26, 2004. Fred was born on October 11, 1917, to John Carroll Sanders and Mary Louise (Robinson) Sanders, in Lamar, Oklahoma. Fred married Edna Sanders on March 21, 1937. Together they had two daughters and two sons. Edna Sanders preceded Fred in death on September 8, 1999. Fred joined the military service in 1943. Fred was a retired cattle farmer, a former Texaco Service Station owner; and former owner of "The Mud Pot Ceramic Shop". He has lived in Lindsay for 43 years. Fred was a member of the Erin Springs Baptist Church. He belonged to the American Legion, and the Lindsay Masonic Lodge. Fred is survived by his daughter and her husband, Frances and Russell Altenburg of Klamath Falls, Oregon, and two sons, Ron Sanders and his wife Ruth, of Land, Oklahoma, and Joe Sanders and his wife Judi, of Del City, Oklahoma. Fred is also survived by nine grandchildren, 16 great-grandchildren; three brothers and their wives; Henry Sanders, Louis and Betty Sanders, Bill and Jean Sanders; and one sister, Sarah Thompkins. Fred is preceded in death by his wife, Edna Sanders, both parents, John C. and Mary L. Sanders, and one daughter, Barbara Lippoldt. Grave side service for Fred will be Tuesday, March 30, 2004, at 2:00 pm., at the Erin Springs Cemetery, Erin Springs, Oklahoma. Ceremonial honors of a 21 gun salute and Taps will be held in respect for Fred?s commitment to our Nation in 1943. Memorial contributions may be made to the American Cancer Society. Funeral arrangements are under the care of B.G. Boydston Funeral Home. Condolences may be sent to the Sanders family via our website, www.boydstonfuneralhome.com.

The family of Fred Walter Sanders created this Life Tributes page to make it easy to share your memories.

Fred Sanders passed away at the Lindsay Municipal Hospital on...

Send flowers to the Sanders family.