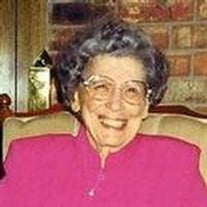 Euval E. Cates Charles, born April 16, 1911, died February 3, 2004. Euval was one of five children. She was preceded in death by her father John W. Cates and mother, Marty T. Garner Cates, sister Thelma Cates Neil and two brothers, Herman and Eldon Cates. She is survived by one sister, Mary Jon Holder Cagle. Euval married James L. Charles on June 18, 1938. They were married for fifty-two years until his death in 1990. She lived most of her life in Lindsay, Oklahoma where she and her husband were well respected for their community support and civic activities. Euval loved animals and was an avid cat fancier, oftentimes feeding hungry neighborhood cats. She loved to travel and in her younger days she loved to dance. She had a sweet smile and was known as a beauty throughout her life. Euval was a very giving, loving and generous person who will be greatly missed by her sister Mary Jon, and her niece Betty Claire Neil Reiger for whom she provided care and love in their early years. Euval loved her family and will also be missed by members of her extended family, Ben, Lea Ann, Cindy Claire Holder and their families, Kay Cates Stephens, Carol Cates Veach, Diane Cates Brakarsh, Rebecca, Chris and Kurt Reiger, Brandon, Shannon and Alison Brown. Euval was a life long member of the United Methodist Church. She was a very active member in church activities. Funeral Services will be held at the United Methodist Church in Lindsay, Oklahoma, Saturday, Febuary 7, 2004 at 2:00 pm. The interment following will be at Green Hill cemetery. Arrangements are under the direction of B.G. Boydston Funeral Home of Lindsay, Oklahoma. Condolences may be sent to the Charles family via our online web site at www.boydstonfuneralhome.com

The family of Euval E. Charles created this Life Tributes page to make it easy to share your memories.

Send flowers to the Charles family.