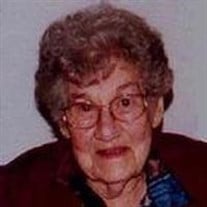 Elva Lee Keith Blevins, age 95, died on December 22, 2001 in Marble Falls, Texas. She was born Sept. 16, 1906 in Mena, Arkansas to Robert Marvin and Mary Lillis (Page) Keith. She and her late husband, Otis Everett "Hap" Blevins and family had lived in the Lindsay area for many years where she had been a long-time member of the Banner Baptist Church. For the past two and one-half years she has made her home in Texas with her daughter and son-in-law, Vallie and Bill Terrell. She is prededed in death by her husband, two sons, Bill Blevins and Joe Blevins, and two grandchildren Kenneth Blevins and Shirley Blevins. She is also preceded in death by her parents, five brothers and three sisters. Mrs. Blevins is survived by sons, Jack Blevins of Mansfield, Louisiana; Buck Blevins of Chandler, Texas; and daughters, Vallie (Blevins) Terrell of Marble Falls, Texas; Johnie (Blevins) Largent Chumley of Purcell, Oklahoma; eighteen grandchildren and numerous great and great-great grandchildren. She has one surviving sister, Ora Ankenman of Sonora, California and many nieces and nephews. Funeral services will be held in the B. G. Boydston Chapel in Lindsay, OK on Wednesday, Dec. 26, 2001 at 2:00 p.m. with Rev. Mike Roberts conducting the service. Music will be provided by granddaughter, Susan (Terrell) Owens, great grandson, Jonathan Owens and great granddaughter, Vallie Owens. She will laid to rest in Green Hill Cemetery in Lindsay. Pallbearers will be her grandsons, Mike Terrell, Timothy Blevins, David Blevins, Dennis Blevins, Buck L. Blevins, Kent Blevins, and Keith Blevins.

The family of Elva Lee Keith Blevins created this Life Tributes page to make it easy to share your memories.