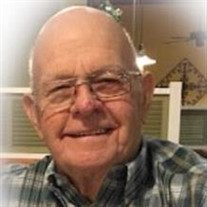 Earl Dacus was born on August 27, 1927, to Cecil and Minnie Mae (Dodds) Dacus in the Dare Community north of Lindsay, Oklahoma. He passed from this life on December 27, 2021, at the age of 94 years, 4 months. Earl attended school at Colbert and Bradley. He grew up on his parent’s farm where he learned to work. His father taught him how to plant and harvest crops, first with a team of horses or mules, and later with a tractor. He preferred farming with a tractor. In 1946, Earl was drafted into the United States Army and was assigned to the Army Air Corps. He was stationed at Clark Field in Manila, Philippines, as a member of the 13th Air Force, 18th Fighter Group. The trip over was an eventful 28 days on the SS Marine Panther with over half the time spent in a typhoon. Earl thought about staying over there because he dreaded the boat ride back home. After returning from the service, in 1948, Earl married Mary Lou Huddleston and to this union three children were born. Terri in 1955, Sherri in 1964, and David in 1971. In 1972 his family grew again when he married Dorothy Faye Graham. Her five children Les, Ken, Clark, Vernona and Tom brought the number of kids to eight and he thought his family was complete. However, the Lord had different plans and in 2001 his family grew again when Earl married Ernestine Lane and she had two children, Jack and Linda. Although at different times Earl was a farmer, carpenter, mechanic, truck driver, and construction worker, he spent the majority of his working years at Acco Feeds in Oklahoma City, where he retired after nearly 35 years of service. He enjoyed retirement, spending his days building porch swings and doing small engine repair. He never really had a hobby. Earl was a devoted husband and father and a dedicated church member. He spent countless hours volunteering at church. Whether it was mowing the lawn, visiting the sick and elderly, or driving a bus for vacation bible school, Earl was always willing to help wherever he was needed. Earl had a smile for everyone and maintained a great sense of humor throughout his life. Earl was preceded in death by his parents and three wives. He is survived by his children, numerous grandchildren, several great grandchildren and a few great, great grandchildren. A funeral service to honor the life of Earl is set to begin at 2:00 P.M. on Friday, December 31, 2021, at the Lindsay Church of Christ in Lindsay, Oklahoma. He will be laid to rest at the Green Hill Cemetery in Lindsay, Oklahoma, following the service. Services are under the direction of Scott and Angel Wilbourn of Wilbourn Family Funeral Home in Lindsay, Oklahoma. Condolences may be made to the family online at www.wilbournfamilyfuneralhome.com

Earl Dacus was born on August 27, 1927, to Cecil and Minnie Mae (Dodds) Dacus in the Dare Community north of Lindsay, Oklahoma. He passed from this life on December 27, 2021, at the age of 94 years, 4 months. Earl attended school at Colbert... View Obituary & Service Information

The family of Earl Dacus created this Life Tributes page to make it easy to share your memories.

Send flowers to the Dacus family.