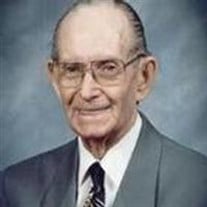 Edwin Bland Moore, age 87, of Lindsay, Oklahoma, passed away Thursday, July 25, 2002, at Mercy Hospital in Oklahoma City. He was born on April 4, 1915 (Easter Sunday) to Bud B. Moore and Bertha Florence Rickey Moore, in Holdenville, Oklahoma. He was well known as the Lindsay High School band director for 23 years He is survived by his wife of 60 years, Veda Margaret Smith Moore. They were married in Siloam Springs, Arkansas on November 22, 1941. Survivors also include their daughter, Carol Anne and husband Don White, of Georgetown, Texas; and their son, Edwin B. Moore, Jr. and his wife Chris of Bridgeview (Lake Texoma), Oklahoma. Grandchildren are Troy Don and Julia White of Bedford, TX; Brandon Lee and Martha White of Lawrenceville, GA; and Nicole Elizabeth White of Vail, CO; also Petty Officer Brian Edwin and Lora Moore, of San Diego, CA; and Staff Sergeant Steven Edwin and Becky Moore of Altus, OK. Great- grandchildren are Brandon Lee White, Jr., Vivian Louise White, Sean- Michael Ross Moore, Katherine Brianna Moore, Elizabeth Ashley Moore, and Katherine Nichole Bridges-Moore. He was preceded in death by his grandparents Henry Douglas (H.D.) and Kate Moore, and Franklin & Fannie Murphy Rickey, his parents and two older brothers, Alton and Curtis Moore. He began his musical career by playing his elder brothers rented cornet before starting elementary school, but lost out when the cornet was returned. He joined the Holdenville Junior High School band as a drummer, because his older brother owned a drum. He was encouraged in the study of music by his parents through private lessons and purchase of several instruments including trap drums, trombone, clarinet, baritone, and violin, while he was still in high school. He decided to be a band director almost from the beginning of his formal music study. Prior to graduation from Holdenville High School, he was a member of the All-State Band and the All-State Fair Band. He won numerous honors on his trombone, after only ten months of study, and had his own radio show at the age of 16. He also played in the school orchestra and the dance and stage bands. He was a frequent soloist at civic clubs, school and church programs, and was in the Oklahoma Honor Society and the National Honor Society. He attended East Central State College in Ada, where he was featured as trombone and baritone soloist. He also served as interim director of the college band, orchestra, and applied music teacher of brass instruments, during the illness of Dad Fentem, band director. He made a number of trips as featured soloist with Doctor Lenscheid, the President of East Central State College, when he went on speaking engagements. Mr. Moore also served as president of College Music club. He transferred to the University of Oklahoma for further music study and received his Bachelor of Fine Arts degree in Instrumental Public School Music, in 1937. While at OU, he was a member of Kappa Kappa Psi and Phi Mu Alpha Sinfonia, national music fraternities. He received his Master of Music Education from the University of Oklahoma in 1938. E.B. Moore began his teaching career at Edmond, Ok, in 1938, when the school has no band. There were only seven experienced players in the school, at that time. He started 17 in the summer and added rank beginners in September. He marched 60 members at the first football game and 70 members in the Governors Inaugural parade in January. His teaching career was interrupted at the time of World War II. He served in the U.S. Army from April 1942 to December 1945, in anti - aircraft artillery, as radar operator. He spent 19 months in the European theater of operations, taking part in four major campaigns in England, France, Germany, and Belgium. He returned to Edmond High School during the second semester of 1945-46 and remained there until 1948. A memorial scholarship award in his name is still presented annually to an outstanding young music student. E.B.

The family of E. B. Moore created this Life Tributes page to make it easy to share your memories.

Send flowers to the Moore family.