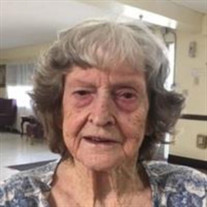 Dorothy Mae (Smith) Rushing was born on November 3, 1930, in Kentucky, to Emmett Smith and Helen (Lawrence) Smith. She passed from this life on January 21, 2021, in Norman, Oklahoma, at the age of 90. Dorothy was raised in Kentucky by her Uncle George and Aunt Edna Haynes, after her mother passed away in childbirth. She was raised alongside their daughter, Jessie May Haynes, who was 8 when she came to live with them. At the age of 8 her Uncle George passed away and she went to live with her Uncle Roy and Aunt Annie Beech in Gladewater, Texas. They had two children, James and Clara. Having no biological siblings, she was blessed with the three cousins, who she claimed as sisters and brother. In 1948, Dorothy graduated from union Grove High school near Gladewater, Texas. Later that year Dorothy moved to Lindsay, Oklahoma after her Uncle Roy was transferred for work with Halliburton Oil Company and she has been a resident of Lindsay ever since. Dorothy married Andy Rushing in 1955. The wedding was officiated by their friend Frank Lee and the wedding took place at his house. Together they had four children. Daryl born 1956, Annetta born 1958, Sherri born 1962, and Bart born 1964. All her children were delivered by Dr. E.B. Pool, at the Old Pool Hospital. Their deliveries only cost $75.00 each. She and Andy were married for thirty years until his passing in 1985. She worked at the Lindsay Sewing Factory for 13 years, the Lindsay Nursing Home for 6 months, the café on Broomcorn Street for 3 years and spent some time at Lola’s Café on 4th Street. She also did a lot of housework for school teachers and helped care for elderly people in need. She took pride that she watched the local judge’s daughter, Paula (Hilliard) Barker for a time. Dorothy was a Christian and loved the Lord. She lived a godly life and she contributed that to her lengthy days, as the Bible says “children obey your parents that your days may be long” and in a letter written by Dorothy, she said “as far as I can remember I did that.” Left to cherish her memory are her children, Bart Rushing and wife Debra of Lindsay, Sherri Stroud of Lindsay, and Daryl Rushing of Lindsay, her grandchildren, Ricky Rushing, Robert Brooks, Maranda Cannon, Randy Cannon, Jason Rushing, Amanda Rone, Tasha Long, Tyler Lewis, and great grandchildren, R.J. Brooks, Jackson Steakley, Cameron Rushing, Destiny Rone, Madison Rone, Gavin Rone, Andrea Long, Jennifer Long. She is preceded in death by her parents, Emmett and Helen Smith, her husband, Andy Rushing, a daughter, Annetta Lewis, son-in-law Robert (Bob) Lewis, and first great granddaughter, Memory Rose. A funeral service to honor the life of Dorothy is set to begin at 1:00 P.M. on Monday, January 25, 2021, at the Wilbourn Family Funeral Home Chapel located in Lindsay, Oklahoma. She will be laid to rest following the service at the Green Hill Cemetery in Lindsay, Oklahoma. Services are under the direction of Scott and Angel Wilbourn of Wilbourn Family Funeral Home in Lindsay, Oklahoma.

Dorothy Mae (Smith) Rushing was born on November 3, 1930, in Kentucky, to Emmett Smith and Helen (Lawrence) Smith. She passed from this life on January 21, 2021, in Norman, Oklahoma, at the age of 90. Dorothy was raised in Kentucky by her... View Obituary & Service Information

The family of Dorothy Mae Rushing created this Life Tributes page to make it easy to share your memories.

Send flowers to the Rushing family.