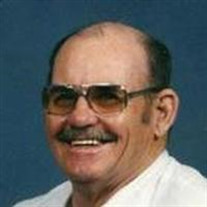 Donald Ray Olmstead, age 74, of Lindsay passed away Wednesday, October 23, 2002 at Grace Living Center in Lindsay. He was born on October 9,1928 in Frederick, Oklahoma to Everett Olmstead and Vonnie Olena Motley Olmstead. He drove a truck as a young man, and went into the United States Air Force and served in Germany during World War II as Sergeant. He served from July 27, 1946 to March 15, 1949 with Honorable Discharge from the Army of the United States. After his discharge he went back into trucking and worked for Brantley Helicopter in Federick from 1965 to 1966. In 1967 he went to work for LTV in Grand Prairie, Texas. Following his move to Lindsay in 1971 he began working for Lee Way Trucking until his retirement in 1985. While enjoying retirement he purchased a farm on Wallville road in 1992 and raised and sold cattle. He was a long time member of Church of Christ. Some of Donalds favorite activities were reading. He had many favorites, the book of Romans, Psychology Today, Readers Digest, US News, National Geographic and sports magazines. He also enjoyed watching T.V., being with his family, going to the farm to take care of his cattle and working the ground. In earlier years he enjoyed overhauling and working on his vehicles, his two different boats, and taking his family to the lake to ski and do some fishing. Donald is survived by his wife Margaret Alice Gates Olmstead of the home, they were married on March 15, 1957 at the Church of Christ in Shawnee, Oklahoma. He is survived by his mother Vonnie Olena Motley Olmstead and children Sharon (Renee) Olmstead Taylor and husband Phil of Lindsay, Oklahoma; Stephen (Mark) Olmstead and wife Alyce of Rockwall, Texas; Tina Dawn Olmstead Winn and husband Terry of Chickasha, Oklahoma. Siblings Glenna Dean Olmstead Lowrance of South Lake, Texas; Larry Everett Olmstead and wife Renee of Mustang, Oklahoma; Nancy Olmstead of Rouge River, Oregon. Grandchildren Ami Renee Taylor Campbell and husband Randall of Ardmore, Oklahoma; John Clayton Taylor, Audra Dawn Taylor, Sarah Jo Olmstead, Caleb Everett Olmstead, Katherine Elizabeth Olmstead, Mackenzie Renee Olmstead, Kennedy Lane Winn and Meredith Elizabeth Winn. Great grandchildren Clayton Cole Taylor Davis, Casey Wayne Campbell and Kendrick Don Campbell. He is preceded in death by his father Everett Olmstead and one brother Kenneth E. Olmstead. Services will be Thursday, October 24, 2002 at 2:00 p.m. at the Church of Christ in Lindsay with Keith Lough and John Werhan officiating. Interment will be at Green Hill Cemetery. Pallbearers include Phil Taylor, Terry Winn, John Taylor, Clay Olmstead, Stan Lowrance, Darren Harris, Brad Olmstead, Kirk Gates, Rex Casner, and Randall Campbell. Honorary pallbearers are Kennedy Winn and Caleb Olmstead. Military honors will be presented by American Legion Post #23 of Lindsay. Memorials may be viewed online at www.boydstonfuneral home.com Arrangements are with B. G. Boydston Funeral Home, Lindsay, OK.

Donald Ray Olmstead, age 74, of Lindsay passed away Wednesday, October 23, 2002 at Grace Living Center in Lindsay. He was born on October 9,1928 in Frederick, Oklahoma to Everett Olmstead and Vonnie Olena Motley Olmstead. He drove a truck as... View Obituary & Service Information

The family of Donald Olmstead created this Life Tributes page to make it easy to share your memories.

Send flowers to the Olmstead family.