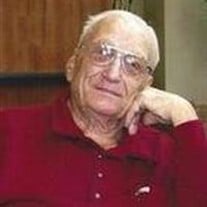 Dale R. Pappenfus of Lindsay, Oklahoma departed this life on May 20, 2013 at his home at the age of 89. Dale was born on July 26, 1923 in Jennings, Oklahoma to Leo Stanley Pappenfus and Ida Mae (Heaton) Pappenfus. Dale attended school in Jennings, Oklahoma. He served his country in the U.S. Air Force as a career, having entered the service into the Army before graduation and was drafted into the Air force where he earned his G.E.D. He served during World War II and the Korean War. His rank was Staff Sergeant, and he was honorably discharged after twenty-three years of service in December of 1961. He married Lucille Gutierrez on June 3, 1953. They made their home in San Antonio, Texas where she preceded him in death in May of 2003. After her death, Dale moved to Lindsay, Oklahoma to be near family. Dale enjoyed working on his house, yard and planting flowers and trees. He was a member of the Banner Baptist Church and the American Legion. He was a kind and generous man. He will be missed by his sisters, extended family, neighbors and friends. Mr. Pappenfus is survived by one step-son, George Gutierrez and wife Norma of Virginia Beach, VA, a daughter-in-law, Carmine Gutierrez of San Antonio, Texas, two sisters: Corlea Manley of Amarillo, Texas and Patricia Burden of Lindsay, Oklahoma and his nieces: Darla Morgan of Pauls Valley, OK, Linda Renegar and husband Don of Amarillo, TX, Luana Reed and husband Jim of Amarillo, TX, Dorette, Nancy and Billie and families of Vancouver, Washington. Dale also leaves behind his great nephews, Patrick Morgan and wife Sim and their children: Ethan and Forrest, Greg Renegar and family, Ben Reed and Phillip Reed and families, and two great-nieces: Kimberlee Morgan and Michael Calhoun and their daughter Katelyn and Amanda Giambaresi and her children: Braden, Kaleb and Allison. Preceding Dale in death were his wife, Lucille Pappenfus, his parents, Leo and Ida Pappenfus, one brother, Stanley Pappenfus and one sister-in-law, Mary Lee Pappenfus. Funeral services for Mr. Pappenfus are set for one o?clock p.m. on Friday, May 24, 2013 at Jennings Cemetery in Jennings, Oklahoma with Pastor Mark Smith officiating and military honors by Vance Air Force Base Honor Guard. Services are under the direction of B.G. Boydston Funeral Home of Lindsay, Oklahoma. Condolences for the family may be made online at www.boydstonfuneralhome.com.

Dale R. Pappenfus of Lindsay, Oklahoma departed this life on May 20, 2013 at his home at the age of 89. Dale was born on July 26, 1923 in Jennings, Oklahoma to Leo Stanley Pappenfus and Ida Mae (Heaton) Pappenfus. Dale attended school in... View Obituary & Service Information

The family of Dale R. Pappenfus created this Life Tributes page to make it easy to share your memories.

Dale R. Pappenfus of Lindsay, Oklahoma departed this life on...

Send flowers to the Pappenfus family.