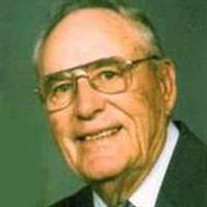 Chancy Edward Miller, age 84, passed away in McAllen, Texas on November 8, 2001. Chancy was born in 1917 at Pink, OK to Neal and Bertha Miller. He started school at French, near Maysville. In 1927 they moved Southeast of Lindsay and he started the fourth grade at Hughes, graduating in 1936. After graduating he went to Cameron and EC Universities. He moved to California during World War II and worked as a welder in the shipyards. Later he lived and worked in Portland, Oregon. He came back to Oklahoma in 1945. In November of 1948, he met a young woman in Oklahoma City named Mildred Pospisil, they married on April 17, 1949 at Prague, Oklahoma. They were blessed with five children, Lorraine, Mary Lou, Kathryn, Teresa and William. In 1949 he was working with his brother Eddie in a dozer business. He also flew his own private plane and rode motorcycles. In 1950, he went to work for the Lindsay Public School System as a mechanic and bus driver, driving a route and a lot of activity buses. He retired in 1970 to farm/ranch full time. He never completely retired from farming, the last 20 years he spent his winters vacationing in South Texas. Daddy took up golf after his 70th birthday, he played every day, he was playing golf the day the Lord called him home. He loved his family. He loved staying active with dancing, playing pool, cards, and horseshoes, swimming and visiting with friends. He was truly loved and we will miss him. He is survived by his wife, Mildred of the home. Three daughters, Lorraine Keck and husband, Pat of Bray, OK; Mary Lou Presley and husband Roger of Euless, TX; Teresa Burnett and husband, Steve of Windom, TX; and one son, William Miller of Lindsay. Grandchildren are, Casey Keck, Colby Keck, Alana Presley, Amanda Burnett, Stephanie Burnett, and William Burnett. Two great grandchildren, Jordan Keck and Devon Keck. Surviving sisters and brothers are Lester Miller, Wharton, TX; Charles Miller, Houma, LA; Eddie Miller, Houma, LA; Alta Mund, Houston, TX; and Alene Baker, Purcell, OK. He is . preceded in death by both parents; one daughter, Kathryn Ann Miller Stephenson; and one sister, Marie Miller Crawford. Arrangements are with B. G. Boydston Funeral Home in Lindsay, OK. Funeral service will be in the St. Peters Catholic Church in Lindsay on Monday, Nov. 12, 2001 at 2:00 p.m. with Father David Monahan conducting the service. Burial will take place in Green Hill Cemetery in Lindsay. Pallbearers are Jim Crawford, Charles Crawford, Bob Ashley, Lynn Watkins, Mickey Baker, and Willie Ellithorpe.

Chancy Edward Miller, age 84, passed away in McAllen, Texas on November 8, 2001. Chancy was born in 1917 at Pink, OK to Neal and Bertha Miller. He started school at French, near Maysville. In 1927 they moved Southeast of Lindsay and he started... View Obituary & Service Information

The family of Chancy Edward Miller created this Life Tributes page to make it easy to share your memories.

Chancy Edward Miller, age 84, passed away in McAllen, Texas on...