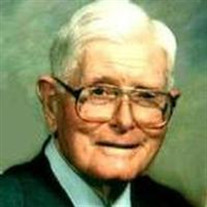 C. W. "Buck" Watkins, age 94, of Yale, Oklahoma, formerly of Lindsay, OK, passed away on April 23, 2001 at the Davis Assisted Living Center in Yale, OK. He was born April 16, 1907 in Kosse, Texas to Frank Manning Watkins and Mittie Thompson Watkins. Buck lived in Lindsay over 39 years, and moved to Yale, OK in June of 1999. He was retired from Exxon Oil on May 1, 1970 having worked there for 44 years. He was a member of the Assembly of God Church in Lindsay for 39 years, having served as deacon for many years. He attended the Assembly of God Church in Yale, OK for the last two years. Survivors include daughter, Louise Rollins and husband Ed of Oakhurst, CA: son, Charles Watkins and wife Linda of Yale, OK; two brothers, Clarencce Watkins of Henrietta, TX and Lewis Watkins of Wichita Falls, TX; Four Grandchildren and Six Great-Grandchildren. He was preceded in death by his wife Gertie A. Watkins on March 31, 1999, they were married on September 21, 1929 in Marlow, OK; one son, James Lee Watkins; his parents; two sisters, Ethel Riley and Jessie Crabb; and three brothers, John W., Gay O., and Wesley W. Watkins. Services will be held at the Assembly of God Church in Lindsay, OK with Pastor David Reddick officiating at 11 am on Monday, April 30, 2001. He will be laid to rest in the Rosedale Cemetery in Ada, OK at 2:30 pm Monday, April 30, 2001. Arrangements are under the direction of the B. G. Boydston Funeral Home in Lindsay.

The family of C. W. Watkins created this Life Tributes page to make it easy to share your memories.

Send flowers to the Watkins family.