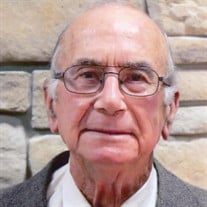 Benham John “B.J.” Branch was born June 4, 1935, in a farmhouse one-half mile southeast of Bradley, Oklahoma, to the union of Oscar Lane “O.L.’’ and Lona May (Benham) Branch. After living in that sharecropper’s homestead for three years, he moved with his family three miles north of Bradley, across the river to another sharecropper’s homestead. Three years later, his father purchased 120 acres 1 ½ miles east of that location, where B.J. resided until his death on July 22, 2021. B.J. was a retired oilfield worker and cattle man. In 1964, he married Joy Christeen Scoggins, of Purdy, Oklahoma. They later had two children, Tracy Lynn and Richard Glenn. After Christeen’s passing, B.J. married Dorothy (Duerksen) Cheshier, of Lindsay, Oklahoma, in 2005. He immediately expanded his family to 23 additional children, grandchildren, and great grandchildren along with his 8 grandchildren and great grandchildren by his daughter and son. B.J. also had numerous nieces and nephews belonging to his late sister, Carrie Bell (Branch) Dutton. He was a simple man who enjoyed a simple life and the simple pleasures it provided. A funeral service to honor the life of B.J. is set to begin at 10:00 A.M. on Saturday, July 24, 2021, at the First Baptist Church located at 401 SW 3rd St., Lindsay, Oklahoma. He will be laid to rest at the Alex Cemetery in Alex, Oklahoma, following the service.

The family of Benham John Branch created this Life Tributes page to make it easy to share your memories.