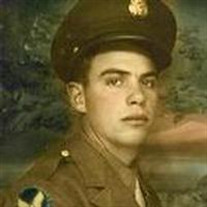 Arthur Clagg, age 80, passed away on May 16, 2004. He was born on October 20, 1923 in Lindsay, Oklahoma to Andrew Jackson and Ida (Southard) Clagg. Arthur joined the United States Army on October 28, 1942. He served in the European theater and fought at Normandy during the "D" day invasion. Arthur served in combat until the end of the war. Arthur married Wanda Fae Cox on October 9, 1951 in Gainsville, Texas. Out of that marriage three sons were born, Rodney, Mickey, and Kevin. Arthur has lived in Lindsay since 1955. Arthur worked as a mechanic and owned "Wanda?s" restaurant in Lindsay, Oklahoma. He enjoyed hunting and fishing and "yes" he was an OU football fan as well as NFL. He was a member of the Odd Fellows and The American Legion. Arthur Clagg was preceded in death by both his parents, and one brother, Ray Clagg. He is survived by his wife, Wanda Clagg of the home; Rodney and Sherry Clagg, of Las Vegas, Nevada; Mickey and Debbie Clagg, of Norman, Oklahoma; and Kevin and Debbie Clagg, of Purcell, Oklahoma. He is also survived by one sister, Virginia Herrin of Midwest City, and four brothers, Paul Clagg, of Norman, Oklahoma, Roy Clagg, of Ratliff, Oklahoma, Marion Clagg, of Surry, Texas and, Don Clagg, of Lindsay, Oklahoma. Arthur will also be missed by the five grandchildren he was blessed with; Cason Clagg of Norman, Oklahoma; Cameron Clagg, of Norman, Oklahoma; William Grayson, or Norman, Oklahoma; Michael Clagg, of San Angelo, Texas; and Valerie Clagg, also of San Angelo, Texas. Services for Arthur will be held at the First Baptist Church in Lindsay, Oklahoma at 10:00 a.m. on May 20, 2004. Interment will be at the Hill Side Cemetery in Purcell, Oklahoma. In honor of his military service during WW2, The American Legion ? Ball Smith - Post 23 will present the American Flag, conduct a 21 gun salute and play taps. Funeral arrangements are under the direction of B. G. Boydston Funeral Home.

Arthur Clagg, age 80, passed away on May 16, 2004. He was born on October 20, 1923 in Lindsay, Oklahoma to Andrew Jackson and Ida (Southard) Clagg. Arthur joined the United States Army on October 28, 1942. He served in the European theater... View Obituary & Service Information

The family of Arthur D. Clagg created this Life Tributes page to make it easy to share your memories.

Send flowers to the Clagg family.