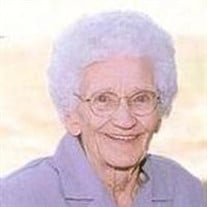 Anna Lucille Jordan left this earth to meet Jesus on December 20, 2003. She was born on January 1, 1917, in Deckard, Tennessee, the fifth of six children born to Charlie T. and Laura M. Branch. When she was a very young child the Branch family moved to a farm near Ennis, Texas, near the Garrett community. Lucille attended elementary school at the Garrett School. When she was nine years old, the family moved to the Dare Community. She then attended Dibble Schools. She married the love of her life, Emra Everett Jordan, on August 15, 1934. They shared 62 wonderful years together before he preceded her in death on October 19, 1996. After marriage, Lucille began her life as a housewife and devoted all her time to her home, church and four children. After her children were grown, she began her career at Griffin Memorial Hospital in Norman, OK, as a Children?s Psychiatric Aide. She loved each and every one of the children in her care and received many awards for her service and dedication. She retired with 22 years of service in 1979. Lucille loved the Lord and was baptized in a lake south of Dare in 1946. She was a faithful member of Banner Baptist Church in Lindsay, OK. Lucille was happiest when surrounded by her family and friends. Her children and grandchildren were her inspiration for everything she did. She was a member of the Blanchard Homemakers Extension for many years and enjoyed entering her fabulous desserts in the McClain County Fair. Lucille loved sports, sewing, garage sales and working on the family farm. She was the most kind, gentle, and caring person one could ever hope to have as a wife, mother, grandmother or friend. She was preceded in death by her parents and 3 siblings, her husband, Emra Everett Jordan, and a son, Everett Leroy Jordan. She is survived by 2 sons and their wives, Wiley and Barbara Jordan and Gary and Wanda Jordan all of Blanchard, OK; daughter and her husband Sandra and Tom Rockey of Olathe, KS. Sisters Verna Mae Hall of Dibble, OK. and Josephine Henson of Shaster, CA.; 14 grandchildren, 25 great grandchildren and 2 great-great grandchildren. Funeral services will be held at 10:00a.m., Tuesday, December 23, 2003, at Banner Baptist Church, Lindsay, OK. Rev. Steve Gardner and Rev. Mike Roberts will officiate, with internment at Green Hill Cemetery in Lindsay, Oklahoma. Casket Bearers include Joe Jordan, Shane Rockey, Marc Jordan, Darren Vittitow, Todd McCracken and Jay Jordan. Arrangements are under the direction of B. G. Boydston Funeral Home in Lindsay, Oklahoma. Condolences may be sent online at www.boydstonfuneralhome.com

Anna Lucille Jordan left this earth to meet Jesus on December 20, 2003. She was born on January 1, 1917, in Deckard, Tennessee, the fifth of six children born to Charlie T. and Laura M. Branch. When she was a very young child the Branch family... View Obituary & Service Information

The family of Anna Lucille Jordan created this Life Tributes page to make it easy to share your memories.

Send flowers to the Jordan family.