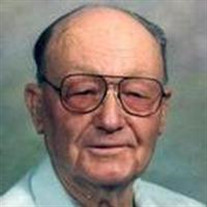 Alton H. Largent, age 87, of Lindsay Ok, passed away Saturday, September 14, 2002. He was born on October 1, 1914 in Cox City, OK to Francis (Bud) M. Largent and Beulah (Robinson) Largent. Alton worked in the oil field for many years and he... View Obituary & Service Information

The family of Alton H. Largent created this Life Tributes page to make it easy to share your memories.

Send flowers to the Largent family.