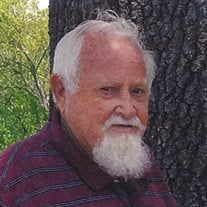 A. K. Hiten passed away on January 4, 2022, in Oklahoma City, Oklahoma, at the age of 90. He was born to G. H. Hiten and Bessie Lee (Wheeler) Hiten, on March 2, 1931, in Briartown, Oklahoma. A. K. has been a resident of Alex, Oklahoma for 46 years. He was a member of the Coon Hunters Association. He spent most of his working life as a pumper in the oilfield before retirement. A. K. proudly served in the United States Army during the Korean War. A. K. married Agatha Seawright at the First Baptist Church in Blackwell, Oklahoma, on August 14, 1955. Born to this union was three sons, Keith, Kenny, and Kevin. They celebrated sixty-six years together before his passing. A. K. was an avid coon hunter and won many ribbons and trophies. For him it wasn’t about the trophies or recognition it was all about the thrill of the hunt. He also enjoyed being in the outdoors camping and fishing. At the age of 90, A. K. bought himself a zero-turn mower because he loved to mow the lots he owned across the street from his house. A.K. was a family man and was a devoted husband, caring father, and grandfather. He will be greatly missed by all who knew him. Left to cherish his memory is his wife Agatha Hiten of Alex, Oklahoma, sons, Kenneth Rhea Hiten and wife Anne of Kansas, and Robert Kevin Hiten of Alex, Oklahoma, his brothers, Larry Hiten and wife Lila of Langley, Oklahoma, and Gary Hiten and wife Bobbi of Colorado Springs, Colorado, his grandchildren, Joshua Hiten, Kyndal Medina, and Mattie Hixson, and seven great-grandchildren. A. K. is preceded in death by his parents, G. H. and Bessie Hiten, one son, Alan Keith Hiten, and two sisters, Betty Jo McCurry and Dana Lea Briggs. There are no services at this time. Arrangements are under the direction of Scott and Angel Wilbourn of Wilbourn Family Funeral Home in Alex, Oklahoma. Condolences may be made to the family online at www.wilbournfamilyfuneralhome.com

The family of A. K. Hiten created this Life Tributes page to make it easy to share your memories.

Send flowers to the Hiten family.